Breakout US star Morgan Wade has announced her first ever UK headline tour in support of her hugely acclaimed debut album Reckless. Touring the UK in June 2022, she will play The Garage, London on June 21st, Glasgow’s Oran Mor on June 23rd and Manchester Academy 3 on June 24th.

Morgan Wade has captured the hearts of fans and critics around the world with her debut album Reckless, a stunning record of Tom Petty-esque rock, classic country guitars and captivating pop inspired hooks. Signing to Sony Music this year the new deluxe edition of the album immediately became Radio 2s Album Of The Week upon its Jan 31st release. And the tearaway single ‘Wilder Days’ was also championed as Record Of The Week and has became an A-List mainstay at the station for well over a month, along with radio play across many other UK stations. 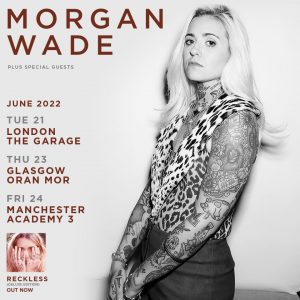 Morgan’s album sits proudly at No.1 in Rolling Stone’s Best Country and Americana Albums of 2021 list, but its cross-genre appeal also finds it at No.13 in the main best of albums list across all genres too. It’s also No.4 with Stereogum, No.5 for Billboard and features in many more. Morgan has also been named as one of Amazon Music’s Artists To Watch 2022, Spotify’s Hot Country Artist To Watch 2022, Apple Music’s Best Of 2021. Pandora’s Artists To Watch 2022 and YouTube Music’s Trending Artist On The Rise.

Ahead of the UK tour, Morgan will be debuting songs from Reckless for the first time in the UK this weekend as she performs on the main stage at C2C Festival as part of their Introducing Nashville series, which see artists taking the stage together in an acoustic line-up to share the stories behind their songs. For more information about Introducing Nashville, visit IntroducingNashville.com