Few bands can muster the ability to combine dark romanticism with a touch of the dramatic like Portugal-based Moonspell tends to do. The band, fronted by singer and lyricist Fernando Ribeiro, has been a creative streak since 2006’s Memorial, although not everyone was that appreciative of the more gothic rock tendencies of 2012’s Alpha Noir/Omega White. For everyone who’s hoping for a more metallic and a less polished approach by Ribeiro and co. will find Extinct to be quite disappointing.

The band pretty much continues in the stripped down vein of the previous double album. Sure, there are plenty of heavier moments to be found, most vividly in songs like ‘Breathe (Until We Are No More)’ and ‘Malignia’, but it’s the more gothic rock-tinged material that gives this record its character. Tracks like ‘The Last Of Us’, ‘Domina’ and ‘The Future Is Dark’ are among the slickest and catchiest songs the band has ever written. They should do really well with the Lacuna Coil and HIM crowds, especially when Fernando Ribeiro uses his dark clean vocals while pouring his heart out in bittersweet melancholia.

Other highlights on Extinct is the film noir atmosphere of ‘La Baphomette’, the Oriental flavours of ‘Medusalem’ and the guitar-driven title track in which guitarist Ricardo Armorim takes the spotlight with some very tasteful leads and solos. Another prominent feature on this album is keyboardist Pedro Paixao. He really gives the material on Extinct the trademark dark Moonspell touch and atmosphere.

Although Moonspell aren’t really venturing out of their musical comfort zone, their latest album still has plenty to offer for both longtime fans and newcomers alike. The songwriting is top notch and this combined with the band’s signature gothic charm makes Extinct a true winner. 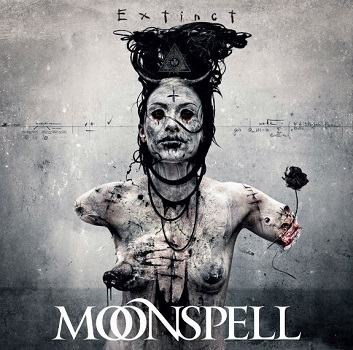