The Lions Pride releases keep coming! This time we have a quality re-release that deserves to see the light of day. Moonshine…interesting. This rather fine album was recorded back in ’94 and sat gathering dust for 20 years until some infinitely wise dude saw fit to release it. By that time the band had been and gone – briefly becoming Laidlaw (who some of you of a certain age may remember). This album, however, deserves to be heard – and not just as a footnote.

It’s a shame we’ve had to wait so long because the album (which was recorded at Eddie Van Halens 5150 studio) is a scorcher. If Aerosmith in their prime had recorded a Southern rock album the result would have sounded very much like this. Raw, sassy, funky and down home with lashings of attitude, blues harp and greasy slide guitar.

Derek Davis’ (later to front Babylon A.D.) vocals are pure Steven Tyler while the guitars slip, slide and jostle for prime position. titles like ‘Warm Beer Catfish Stew’ and ‘Mama’s Kitchen Brew’ let you know exactly what to expect. There are acoustic country stompers, big, rough-hewn ballads, pedal to the floor rockers and a faithful cover of CCR’s classic ‘Fortunate Son’. Fans of The Cadillac Three, Blackberry Smoke and A Thousand Horses will lap this up. A band whose sound was ahead of it’s time, crack open a Bud, check this out and bemoan the fact that this was their only release. 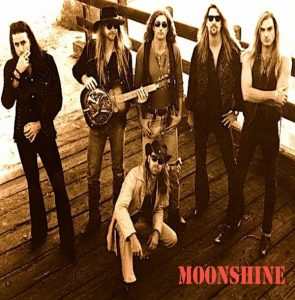