Part One of the Portland Psychsters New Opus

Moon Duo’s new LP has been split into two parts; not only that, but the duo now appear to be a trio! Confused? You won’t be. The decision to split Occult Architecture into two releases came during the mixing process. According to guitarist Ripley Johnson, “We were recording and mixing the songs; beginning in the dead of Winter, and continuing into the rebirth and blossoming of the Spring.  There’s something really powerful about the changing of the seasons in the Northwest; the physical and psychic impact it has on you, especially after we spent so many years in the seasonal void of California”.

The album opens with ‘The Death Set’, a fuzzed-up monster that fills every space that it sonically occupies.  It’s also one of the few tracks that follow the expected constructs of a Moon Duo Record.  ‘Cold Fear’ features a more electronic approach akin to 80’s synth pop and has a Krautrock feel; the synths buzz and swirl throughout, as the drum track loops.  Follow on track ‘Creepin’ is fast paced psych pop and has some of the same touches, but has an urgency within its delivery; the synths sounding, once again, very much like they were built in the 80’s.

The second half of the album kicks off with ‘Cult of Moloch’ and offers a change in tone.  The synths remain, but introduce a darker layer; a more gothic feel, bringing to mind The Sisters of Mercy and Nottingham’s brilliant The Cult of Dom Kellers ‘Goodbye to the Light‘  LP from 2016.

‘Will of the Devil’ lightens a little, leaning more towards synth-pop once more.  The albums highlight is without doubt, the epic closer ‘White Rose’; a motorik and relentless track, that moves towards its swirling end.  The final track doesn’t feel like closure. It actually leaves a state of anticipation for the second part.

Occult Architecture Vol. 1 marks the first time drummer John Jeffrey plays on the whole album having only played on selected tracks on 2015’s ‘Shadow of the Sun‘, and although the album does have a more synth approach, he definitely brings something that expands the groups sound.

Make no mistake, there isn’t an atypical diversion going on here, Volume 1 remains as vibrant and true to the craft of Moon Duo’s previous releases; there are differences, in terms of tones and the synth textures, but the sound remains undoubtedly their own.  Listening to this first part, does set off a curiosity in terms of what the next volume will deliver; how warm can it become without a radical departure?  For now, volume 1 does exactly what you expect it to and want it to. 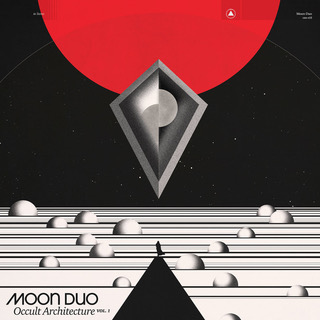