The early ‘80s have been retrospectively airbrushed with neon blues and pinks, but for many of us reality was a lot darker. Inner city riots, the systematic dismantling of industry and a snaking queue of unemployed all existed under a leaden, grey sky which reflected an unruly sea of brutalist architecture. Fortunately, such conditions are fertile ground for great art, and that’s where Liverpool’s Modern Eon stepped in. Formed in 1978, this quintet came of age in the following decade, releasing their sole album Fiction Tales in 1981. Succinctly capturing a sense of urban desolation, it was a record in perfect sync with the era, yet it also had an otherworldly, timeless quality. Criminally allowed to go out of print, Fiction Tales gets its very first CD issue, along with a disc bursting with rarities and b-sides, making this the real soundtrack of the ‘80s.

Throughout the late ‘70s/early ‘80s Liverpool’s alternative music scene was somewhat overshadowed by their Mancunian neighbours, but legendary nightclub Eric’s nurtured a thriving scene that birthed the likes of Echo And The Bunnymen and The Teardrop Explodes. Born into this creative maelstrom, Modern Eon were soon signed to Dindisc (home to fellow Liverpudlians Orchestral Manoeuvrers In The Dark) who released Fiction Tales mid-’81. The album felt familiar as several tracks had been available as singles and b-sides, but that in no way negated its power, and it got off to a typically understated start with the sublime ‘Second Still’. It’s no secret that Modern Eon were influenced by soundtrack composer Ennio Morricone (whom they asked to produce this record; he didn’t) and the cinematic nature of Fiction Tales can’t be overstated, and ‘Second Still’ should plant vivid and inerasable images in your mind, before the cut and paste title-track leaves spools of film on the cutting room floor.

The stark, monochrome sleeve which houses this album is indicative of the sound contained within; it’s dark and discombobulating and gives the impression of someone not quite at ease. Taking the experimental nature of David Bowie’s Berlin Trilogy and merging it to an early Bauhaus/Joy Division aesthetic was always going to be an interesting proposition, and it’s one which comes to fruition on tracks such as ‘Euthenics’. But Modern Eon were no mere copyists, and they certainly brought something fresh to the genre as, for example, the huge white spaces that punctuate ‘In A Strange Way’. Playing like a piece of celluloid that has been slowed down to an unbearable crawl, ‘In A Strange Way’ holds the listener in animated suspension and offers little in the way of respite. Modern Eon have a deceptively simple sound; it’s multi-layered, yet sparse, and you get the feeling that the band, through a musical sleight-of-hand, are hiding their talents, but there’s no disguising the dexterity bassist Danny Hampson and drummer Cliff Hewitt display on closer ‘Mechanic’ (and indeed, the whole album).

Fiction Tales is the sound of a band confident within their own signature style, and offers a tantalising glimpse of what the future could have been, had they not folded the following year. Like a classic French film noir, Fiction Tales is not always comfortable, but it’s always rewarding.

Four tracks recorded pre-Fiction Tales open the second disc, and a couplet from 1979 give an intriguing glimpse of Modern Eon in utero. Both ‘Second Still’ and ‘Choreography’ (from their debut EP, Pieces) would appear on their debut album, and as with many of these recordings, there’s something lost and something gained from the songs into which they’d metamorphose; they’re raw and visceral yet lack the finesse of the final cuts. However, when listened back-to-back with the following two tracks from 1980 (‘Euthenics’ and ‘Waiting For The Calvary’) the newer cuts evidence a definite development and reveal a band who subtly shifting with the times, and finely honing their craft.

Modern Eon came of age when bands expended a great deal of effort on b-sides, and the two that follow acted as extensions to their corresponding flips. ‘Cardinal Signs’ explodes and sends shards of sonics in every direction, and its buoyancy makes you wonder why it wasn’t an a-side (as is the case with ‘Visionary’ and ‘Splash!’) but they’re each testament to the rich seam the band were mining. Unreleased tracks from 1982 close this collection, and when listened to chronologically they make perfect sense, and continue the band’s upward arc, that constant desire to push their sound forwards is ever present, and only makes their split later that year all the more puzzling.

For some reason Fiction Tales has slipped under many a radar but hopefully this loving (and long overdue) reissue will find it taking its rightful place alongside Unknown Pleasures, Dirk Wears White Søx and The Scream as a cornerstone of post-punk. 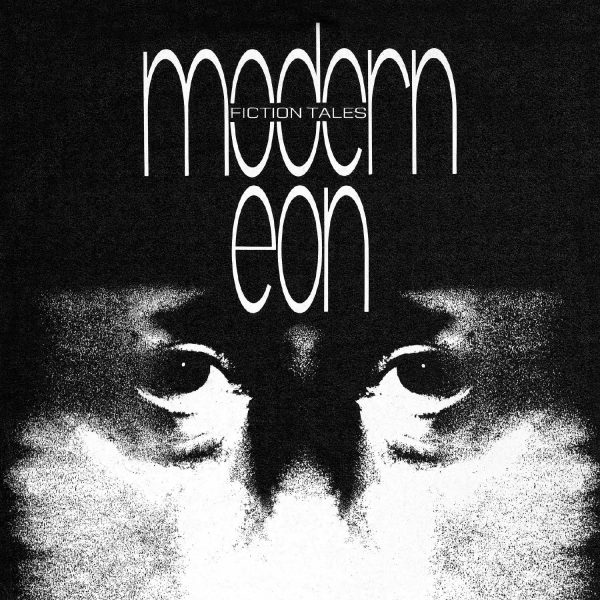