Tributes to the late, great Chuck Berry seem to be in vogue at the moment. Last Friday saw the release of Ronnie Woods ‘Mad Lad’ and a few weeks before that came ‘Rock ‘n’ Roll’ – a guest-star laden Chuck tribute album from Royal Southern Brotherhood leader, Mike Zito.

Zito is a talented solo artist, guitarist and producer…this should be a no-brainer. Which is exactly what it is. Zito and his band lay down the basic tracks, and then it’s up to the guest musicians to do their thang. It’s Chuck Berry – the fact that the songs are great is a given, they’re pretty hard to completely fuck up, so it’s all down really to varying degrees of success.

So, who does what? What works? We kick off with ‘St.Louis Blues’ with guest star Charlie Berry III. Berry certainly has his grandfathers touch and the addition of a subtle horn section knocks this out of the park. No frills, no ego trips, just a great 3 minute Chuck Berry toon. Good stuff.

And on it goes. There are a great deal of semi known blues journeymen on this album and they all acquit themselves admirably. Anders Osbourne adds a jazzy shuffle to ‘Memphis’ while Ryan Perry lends his gruff, soulful vocals and slightly fuzzed guitar to ‘I Want To Be Your Driver’. Eric Gales, who can seemingly do no wrong at the moment, rips it up on ‘Back In The USA’.

It’s all fine, bar band stuff, all clearly Chuck and no radical reinventions in sight. It’s clear that everyone involved was having a great time and doing it for the right reasons – the memory of Chuck Berry is always front and centre and respectfully observed.

On an album such as this there are bound to be highlights. One of them can be seen on the video above…Mike and Walter Trout tearing into a ‘Johnny B Goode’ which is chock full of rambunctious soloing. It’s the albums first real fireworks display and the moment where it takes off. The baton is then passed to Robben Ford and his New Orleans soaked reading of ‘You Never Can Tell’. Ford absolutely gets it and his sympathetic guitar work is a joy.

Special mentions must also go to Luther Dickinson, slide supremo Sonny Landreth and Alex Skolnick…yes, he of Testament. Their trip on a ‘Down Bound Train’ is a definite change of tone and, yes, there are pyrotechnics but it works. Brilliant, moody and classy.

If there are high points, there is also bound to be the occasional misfire. And so it is here. Kid Andersen presumably actually chose to cover ‘My Ding A Ling’ – it’s ok, it’s blues’d up but come on, it was never Chucks finest hour. Joe Bonamassa’s take on ‘Wee Wee Hours’ is the longest track on the album by some distance…presumably to give JB time to showboat. It’s a nice version but minimalism has never been Bonamassa’s forte, there is much OTT widdling and wailing…literally into the wee wee hours. It’s a tad overbearing and needy.

But, overall, this is a strong album. It’s exactly what it says it is, a collection of rip-roaring songs by one of the masters. Egos, on the whole, take a back seat and a sense of fun shines through. Hats off to all involved.

Released on 1 November 2019 by Ruf Records 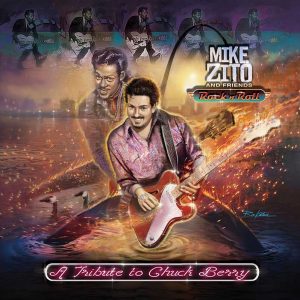