If, like me, you’ll be wondering why LOVE don’t feature more prominently in the annuls of music history. LOVE, overshadowed by labelmates The Doors, are (rather confusingly) often relegated to the status of also-rans. One of the first inside accounts of that band, former drummer Michael Stuart Ware unpicks the bands convoluted history and Pegasus Epitaph provides a frank and forthright account of the summer of LOVE.

Michael’s early story is typical of aspiring musicians the world over and there’s just enough backstory to set the scene; a music obsessive who paid his dues playing fraternity parties and small clubs in bands such as The Fender Four and The Sons Of Adam before the stars aligned and opportunity knocked in the shape of LOVE. Inter band politics (which would surface throughout the bands history) made his induction a baptism of fire and Michael explores those times with a frank honesty.

Pegasus Epitaph’s style is conversational, it’s rather like sitting at a diner table with the author which makes for an easy read but Michael doesn’t pull any punches. There’s no sugar coating here and Pegasus Epitaph is a tome that examines the dirt underneath the fingernails. In an age that’s often presented with a psychedelic wash it wasn’t all peace and love; bad drugs, the dangers of being a freak in a puritanical age and, as one of the first racially diverse bands in a divided America all conspired against LOVE )as if their self destructive bent wasn’t enough…). 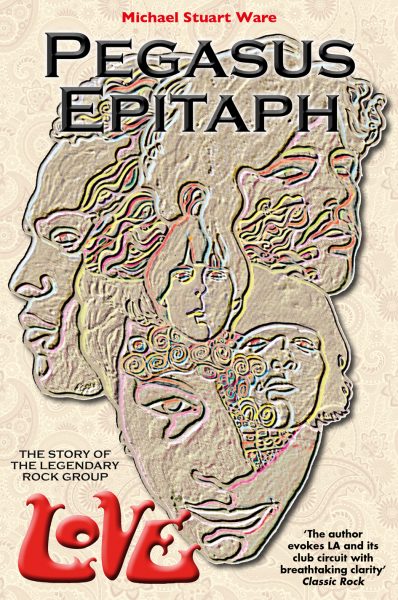 Honesty is the word that leaps from every page and no more so than in the description of lead singer Arthur Lee. Like most gifted artists he was a complicated, multi-faceted character who paid for his talent with some serious personality flaws. Funny, cunning, charming and manipulative Arthur was all these and more which made him a rather difficult proposition. It must have been tempting to airbrush history and present the band as a harmonious unit to increase their standing in prosperity.

In many ways the tale told in Pegasus Epitaph mirrors that of the prevailing sixties counterculture; from its initial optimism to its bad acid conclusion the story of LOVE followed a similar trajectory. It’s a cautionary tale inside which you almost feel the warmth of the (California) sun and smell of pungent hashish smoke and, like the era itself, LOVE had their own comedown, their very own hippy dream that evolved into an Altamont style nightmare and found the band fracturing with acrimony.

Overall Pegasus Epitaph is a well rounded account although it does leave a few loose ends (did the band ever get their royalties?) but it’s nevertheless a highly readable account that sheds light on on of that eras overlooked bands.