Amazingly it’s over 35 years now since Michael Schenker emerged from his time with UFO, recorded a stunning debut album with an almost unknown vocalist and put together a tremendous touring band, culminating in the mighty double live album ‘Live at Budokan’. Since then, his career has taken several turns, but he’s once more recording and touring, now with his Temple of Rock Band. This concert isn’t quite an anniversary show, taking place midway between the respective 35th anniversaries of the debut and ‘Budokan’ albums, but when this event was organised, under the title ‘Michael Schenker Fest, and the opportunity came to perform with three of his past vocal partners, along with bassist Chris Glenn and drummer Ted McKenna from the original MSG live band, I’m only too pleased that the whole thing was recorded and filmed.

This release is a nice package of the whole event, coming in 2CD, double CD + DVD, vinyl, single DVD and Blu Ray formats, and musically it’s a great listen. The show opens with the instrumental ‘Searching For Freedom’, before the band begin with another instrumental, ‘Into The Arena’, which sets the tone for the whole album, because it sounds superb. It bristles with attitude and class, and Michael Voss has done a sensational job on the mix, which is crystal clear, but still very ‘live’ sounding. First vocalist on stage is original MSG singer Gary Barden, who leads the band through five of the songs he recorded with the band, and to be frank, this is probably the best part of the entire album. The songs this line up recorded still sound fresh, the band play as if the intervening 35 years never happened, and Barden still sings well, albeit in a lower register these days. These is followed by the only reference to Schenker’s time in the Scorpions, an excellent version of the instrumental ‘Coast to Coast’, then it’s time for Graham Bonnet to take the stage.

While Gary Barden did a sterling job on his songs, it feels like Bonnet is struggling almost straight away, with reaching notes in his higher register clearly a struggle. His recent vocal problems are well documented, and I won’t dwell on them, but it’s a shame, because behind him, the band are really hitting their stride. Musically, ‘Desert Song’ in particular is really good, although the single from the ‘Assault Attack’ album, ‘Dancer’, has not aged well, and it’s a bit of a disappointing end to CD1.

CD2 also opens with an instrumental, ‘Captain Nemo’, and it sounds just good as the previous two, again with the band, augmented by Steve Mann on 2nd guitar and keyboards, firing on all cylinders, until the place behind the mic is taken over by Robin Macauley, who worked with Schenker in the late 80s and early 90s. Like Bonnet, he gets to sing on three tracks. These mostly lean towards AOR, which isn’t really Schenker’s forte, and ‘This Is My Heart’ isn’t the greatest song, whereas ‘Save Yourself’ is much better, with a typically brilliant guitar solo. McAuley’s voice is still pretty strong, and he sings well on these tracks, and it’s down to him to take the lead on the set’s final burst, three UFO tracks, beginning with ‘Shoot Shoot’, then moving into Schenker’s showpiece ‘Rock Bottom’. The opening riff to the latter rarely fails to quicken the pulse, and when the guitarist takes over for his signature solo, it’s easy to see why his playing is so revered, and why he still has that mystique. In this section of the set, he really does seem to be playing as well as he has since leaving UFO. The finale is ‘Doctor Doctor’, with all the vocalists on stage, taking a part each, and it brings the show to a satisfying conclusion. The whole set is mostly a really good listen, and bearing in mind there are almost no Scorpions songs included, shows what a rich career Schenker has had.

The DVD is a straightforward visual record of the concert, and interestingly, there are no credits on my review copy, which is a little odd, but it also shows what a tremendous venue the Tokyo International Forum is, looking very impressive through the whole show. But as with a lot of concert films, it’s often the little details that stand out, like the MSG logo being altered to show that he now plays Dean guitars rather than Gibsons, but that in the patches he wears on his jacket, the MSG one is still the old logo, but also how often he produces those amazingly fluid, lyrical guitar runs using only one hand, with the other waving to the crowd or even holding his camera, although the less said about Gary Barden’s air guitar the better. While the 5.1 mix is excellent, I did think that the crowd was mixed lower than on the CDs, which can sometimes spoil the atmosphere, but it in no way detracts from how well this is filmed. There are only a couple of extras, a slide show and some footage of the soundcheck, which includes, Barden and Schenker discussing alterations to the setlist and a run through of a couple of songs for the benefit of what may be VIP pass holders, although this isn’t clarified. It would have been nice to have some interviews with the various musicians, for example.

Overall, this is a great package as a souvenir of what will probably be a unique occasion. If, musically the whole package had been up to the standard of the Gary Barden section of the show, it could have been even better, but it’s well presented, sounds and looks excellent, and is a fine tribute to one of the all-time great rock guitarists. 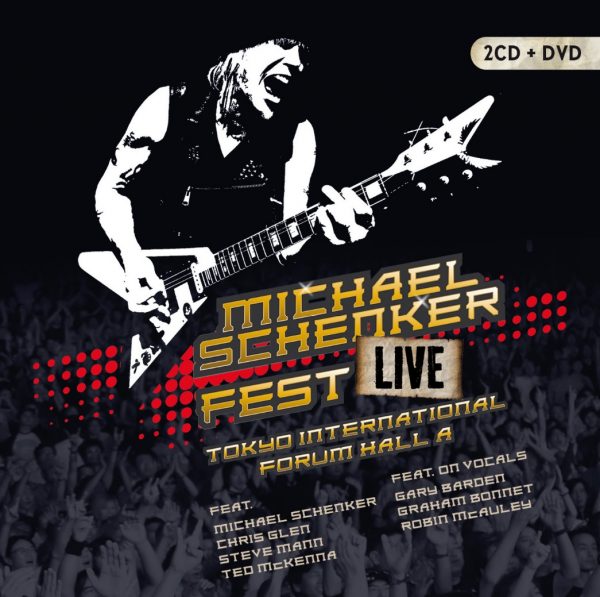