Whether you know it or not, you’ll have heard Michael Landau. He’s the gun-for-hire extraordinaire. He’s played with everyone from Ray Charles to Mariah Carey, with a Grammy ceremony of names in between (Alanis Morissette, Pink Floyd, BB King, Joe Cocker). He has quite the fan club too, Steve Lukather and James Taylor regularly singing his praises to anyone who’ll listen.

Occasionally, just occasionally, he makes his own albums and puts together his legendary quartet to jam live. And quite a select little group of muso’s they are too. David Frazee on vocals, Jimmy Johnson on bass and the incredible Abe Laboriel Jr. (Paul McCartney) on drums. Backed by consummate A-listers, Landau gets the chance to slip the leash, to cut loose, to play whatever the freak he wants to play. And that, let me assure you, is a thing to hear.

And that’s exactly what we get to do on his latest release. The Liquid Quartet decided to hole up in the fabulously named Baked Potato Jazz Club in LA, plug in, roll the tape and record an intimate live set. No rehearsals were involved or abused in the making of this album, according to Landau, they turn up and “let the music take us all for a ride”. So buckle up folks, we’re invited too.

We kick off with ‘Can’t Buy My Way Home’ – which kind of sets the template. A minimal, stripped back sound, there’s lot’s of space around the instruments, lot’s of room for them to breathe. The intro is kinda bluesy, kinda jazzy, kinda…noodly. But nice, melodic. It’s good and loose, they’re ready to jam at the drop of a hat…which they eventually do. Landau weighs in with a solo, a frankly stunning metallic jazz frenzy with some very tasty Jeff Beck style vibrato in there – indeed, Beck’s live at Ronnie Scotts album feels like a close relative to this release. It’s all head spinning stuff with shredding aplenty – albeit in a jazz club framework.

And that’s only track one – from there on in the band are settled and we’re off and running. There are so many other treats in store. By track two Landau is tearing it up, relishing the chance to cut loose. The sound is still stripped back, and yet hugely full. Landau’s guitar roars and fills the room – it wails, spits, divebombs and scorches.

We also get a stunning 10 minute alien-jazz eco-blues which rapidly becomes very anti-Trump – “you don’t even think to hide your greedy life”. It eventually eases into a velvet-wrapped solo, with single notes so sweet that they draw individual cheers from the appreciative crowd. It’s mind-bendingly good stuff, finally ending with, after a few seconds of stunned silence while the audience pick their jaws up off the floor, rapturous applause.

There are sumptuous ballads that highlight the interplay between the band, you can almost hear them listening to each other (if that makes sense). They’re totally organic, taking as long as it takes to get the story across. Totally unforced, unhurried and living in their moment, they’re unpredictable things of beauty.

But don’t panic, it’s not all mellowness. Landau & co. frequently roar. ‘Bad Friend’ is a raw blues chug filled with extraordinary slide which suddenly appears from the amps in mercury blasts. It’s full of bruising, low-slung cool, Landau’s guitar now wasting everything in it’s path. It pounds, winks, cajoles and fucks…all at the speed of light. Hendrix, Page, Wylde – they all get millisecond look-ins.

You find yourself ‘wow’ing at something new every few seconds. That slide tone – part Cooder, part Landreth and all cosmic. ‘Renegade Destruction’ (from the album of the same name he recorded with Robben Ford. Now there’s a guitar duo) is simply majestic. It’s Hendrix at Woodstock but right here, right now – updated, upgraded and re-tooled for the millennium. A satin nailbomb, until it morphs into an outro of John Martyn ‘One World’ type beauty. Minds are collectively being blown in the Baked Potato.

We end with a pair of near 10 minute instrumentals – just in case you weren’t already overawed enough by this quartet. The band spend this time dancing on the edge of release. They drop from orbit into crystal clear waters and flow over reflection-smooth pebbles. They growl, inhale. It’s aural impressionism, there are a multitude of multi-colour splashes of expressive guitar and drums. The connection between Landau and Abe, in particular, is lightning-in-a-bottle good. It’s jazz…but it’s not. It reaches for the outer limits as a matter of course. Time stops for these four dudes. It’s a masterclass is what it is.

So yeah, pretty good. Oh, to have been in that room on that night. If you are a fan of rock, blues, jazz, live music or world-class musicianship of any genre, colour, gender or description, you need to give this a spin. Live is where these guys thrive. This sounds like it should be a once in a lifetime, we’ll never play this well again kind of moment, but I suspect that it’s just another gig for this ridiculously talented collective. 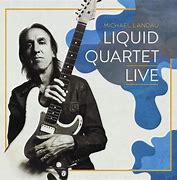