From the slightly death-metal-tinged stuff to the more hardcore orientated stuff and even the more chart friendly edge of metalcore, there’s such variety within metalcore itself these days. Giving a good scope of the metalcore flavours out there today we have four releases on offer.

Read them all or click the band names above to go straight to their review.

Area Core – The End Is Near

First up is Area Core, a Czech four piece outfit signed to MetalGate records. The band finished in fourth place in the MetalGate Massacre competition and put on such a performance the label signed them up immediately. That should show that there is great potential for Area Core. Sadly, The End Is Near just doesn’t live up to that potential. There’s some great riffs throughout the album, that’s probably about the only really focus point.  Although instrumentally the album is fairly solid, the vocals let it down massively. I can’t get past it either, the clean vocals feel half assed and sloppy and the gutturals lack that heavy conviction. That mixed with some bizarre digital effects used to mask the fact that the clean vocals are pretty dire makes it unbearable. All in all, The End is Near just makes me think the end can’t come soon enough.

Moving swiftly on to more promising things, The Skyline Fission by SlavEATgoD is a vast improvement in comparison. Showcasing the more tech /death side of metalcore, SlavEATgoD could be the metalcore brethren of Born of Osiris. The Skyline Fission is a well-put-together mix of electronic soundscapes, tech/djent riffs and metalcore vocals. The guttural lows and higher screams work well and even the clean vocals have an edge to them. The riffs are punchy but a little generic in places, tending tend to fall into the bottom string, first fret routine that many “djent” artists abuse so much but that can be overlooked when it’s taken as a whole package.  The little electronic touches provide a final layer that helps create seamless walls of sound. The album has a great dynamic, it’s fast paced, heavy and really easy to get lost in. This could be The Skyline Fission’s major drawback, it’s so easy to lose yourself in it that it makes the eight tracks feel all the more shorter. On the whole, The Skyline Fission is a solid effort from SlavEATgoD.

Empress Heights is probably the most straight-up metalcore album of this bunch. Opening with a melodic intro, full of ambient electronic chimes and a crackly distortion, the intro sets a melodic tone before the crunchy riffs of ‘Changes’ kicks in.  A punchy anthem, it’s packed with up-tempo riffs and singalong sections that really capture the listener. Empress Heights is up-tempo and catchy throughout, the crowd chants and choruses stick with you. Although there’s a slight feeling of that teenage angst and emotional content, it’s not too whiney and still has enough attitude and balls to carry it off. Some highlights of the album include ‘No Surrender’ and ‘Dead and Buried’. Both tracks mix up the use of melodies, riffs, beatdowns and high and low vocals. Empress Heights would be a great buy for fans of Parkway Drive, Alexisonfire and maybe even Bleed From Within. I’m definitely looking forward to hearing more from The Valiant soon.

Okay, so this has been out for a while now but te Brutai EP is probably my favourite of this bunch. Launching straight out of the gate is ‘Flood’, a pummelling mix of Gojira-esque grooves and a structure that is reminiscent of the heavier Trivium stuff. This vibe continues throughout the EP and is joined by a slight tinge of Nu-Metal in places. “Nu-Metal! BAH!”, I hear you say. Well, don’t be disheartened. It’s on subtle and it works extremely well. From beginning to end the Brutai EP sounds huge. The melodic clean vocals still have a weight to them and the instrumentals blend heavy, melodic, and groove without compromising any element. Even the slow building ‘Sleepers’ sounds epic in it melody before erupting into a swirling maelstrom of pounding drums and dual guitar harmonies before again rising into a tidal wave of djent laden riffs, emotional angst and big choruses. It’s easy to see why Brutai have been picked for this year’s Bloodstock festival and also as support for Monuments in May. I for one am definitely hoping for big things in the next year or so from Brutai. 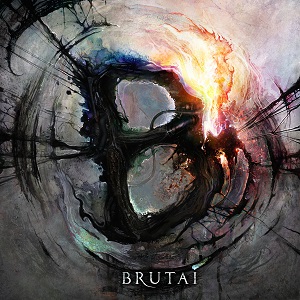