Today kiddies, we have four new releases from Metal Blade Records. Chicago’s psychedelic doom quartet Mount Salem are re-releasing their 2013 EP, Endless, with additional tracks. Sweden’s Noctum have returned with album number two, Final Sacrifice. From Denmark dependables Artillery comes their seventh album, entitled Legions. And Flotsam And Jetsam have returned with a re-recording of their classic second album from 1988, No Place For Disgrace. Read the lot or click on the band names above to go directly to the review.

If Chicago’s four-piece psychedelic doom band Mount Salem were a building, they’d be the mansion on the hill, the one with the huge gate where the car breaks down just outside and its passengers seek solace only to find they are soon to become the guinea pigs in some twisted experiment in the dungeon/science lab. Sabbath meets Cream meets Iron Butterfly meets psychedelia meets blues, with the fuzzed-out guitar of Kyle Morrison and the farting bass of Mark Hewett thundering along while Cody Davidson hammers at the drums like a dodgy funeral director burying someone before their time, Emily Kopplin’s voice echoes beautifully in the albums dark chambers.

Haunting, ethereal, majestic, and spellbinding, first released in February 2013, Metal Blade have done us a great service in making it available again with two extra tracks. If you missed it the first time around, you’d be advised to pick it up now. If you’ve already got the first edition, yes, the two new tracks are worth it. Its colossal riffs and staggering drumbeats glazed with a booming organ laying a solid foundation for the haunting lyrics, Endless is an accomplished début that should get this band the acclaim that they deserve. All we have to do now is await the album… 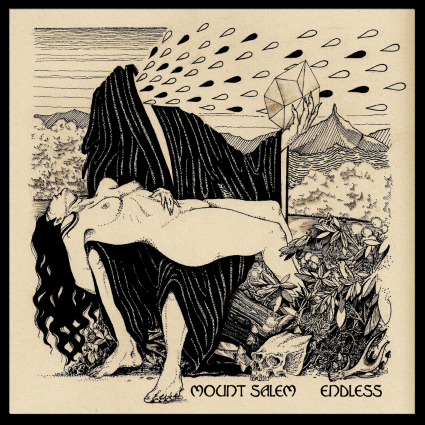 From Uppsala, Sweden, home to Watain and In Solitude amongst many others, comes album number two, Final Sacrifice, from Noctum, a heavy metal/doom band with a Mercyful Fate/Black Sabbath bent. Yep, there are a few similarities, to the aforementioned In Solitude in particular, but Noctum pull off their doom/occult worship with aplomb, imbuing their own deep, dark voice with all the power of the ancients. After three or four tracks, you’re beginning to wonder of it’s all a fluke, but this is much more than idle idolatry or simple homage. While ‘Liberty In Death’ and ‘Resurrected in Evil’ are great tracks, from ‘Void Of Emptiness’ onward, any doubts are quickly dispelled, ‘The Revisit’, with the flute in the intro casting a mystical hue over the track and calling to mind Blood Ceremony, and ‘Temple Of The Living Dead’ proving to be the album’s best.

They’ve got the riffs and the leads, they’ve got a bassist with a cool sense of melody and rhythm, they’ve got a lead-booted, hammer-fisted drummer, they’ve got a vocalist with a devilish set of pipes on him, and they’ve got the songs. Granted, some if not all of them follow tried-and-tested structures and employ the well-worn dynamics of the classics, but though there’s a distinct familiarity, even the occasional sense of déjà vu, about the album, as Sabbath/Fate-infused doom reverence goes, Final Sacrifice is pretty damned good.

Denmark’s Artillery, for those that don’t know, have been at it since 1982, albeit with two seven-year gaps, one in the nineties and t’other in the noughties. Seasoned veterans, it’s fairly safe to say that they know a thing or two about metal thrashing madness and with album number seven, Legions, Artillery are as strong as they ever were. It’s no masterpiece, but as a thrash album that has a few notables to stand up against – particularly Onslaught’s VI – it’s got more than enough to offer.

From the rabid riffs through to the scorching lead work, the guitar work of the Stützer brothers is outstanding, their tone crisp and biting. New drummer Joshua Madsen does a sterling job, his beats defined, and his style adding character to the tracks to flesh out the low end and complement Thorslund’s deft bass work. And new vocalist Dahl’s range is broad, his approach diverse, and his ability to deliver the (oft-times clichéd) lyrics with passion enough to imbue them with fire. With a couple of tracks that add little to the album – ‘Enslaved To The Nether’ and ‘Ethos of Wrath’ – Legions is a solid thrash album from a band that’s clearly been revitalised by the addition of two new members.

Flotsam And Jetsam – No Place For Disgrace

With Ugly Noise just over a year old, fans would probably be expecting – or wanting perhaps – new material from Flotsam And Jetsam. But no, instead, in answer to the many requests to remix the album and the difficulties in obtaining the master tapes, they have decided to re-record and re-release their second album, 1988’s No Place For Disgrace, in its entirety. An unorthodox move for any band, yes, but twenty four years later, this is still a great album and one that deserves to get the attention of metal fans in the 21st century. Of course, the production is much better, the band sound much more refined – it’s been thirty years after all – and the cover of Elton John’s ‘Saturday Night’s Alright (For Fighting)’ is still, well, alright. But it’s the band’s material that makes – and made – this album what it is.

The opening title track and ‘Dreams Of Death’ are classics, ‘Escape From Within’ is a seven-minute epic that plots an unendingly exciting dynamic path, and ‘P.A.A.B.’ features some incredible guitar work. And ‘N.E. Terror’ and ‘I Live You Die’, both co-penned with Jason Newsted, give an insight into the opportunities Metallica missed by (criminally) allowing only three of his songs to appear during his tenure (read MR’s review of his album, Heavy Metal Music, here). If you heard this album the first time around, if only out of mere curiosity, you should give this version a listen as you won’t be disappointed. However, if Flotsam and Jetsam are new to you and you want a taste of the past with a fresh sound, then this is worth more than a blast or two.