Messa are like nothing you’ve ever heard. Formed in 2014 , this Italian Doom band has been famously described as sounding like “Stevie Nicks fronting Black Sabbath”…but that don’t even cover the half of it. Strongly influenced by the sights and sounds of the Mediterranean and the Middle East, ‘Close’ is a widescreen, epic travelogue of an album.

We begin with the warm, gentle keys of ‘Suspended’. There’s a squall of feedback before vocals and doomy guitars make an entrance. It rumbles onwards, gathering momentum and definite hints of Sabbath before dropping out to a (loud) strummed guitar. There are angular slashes and then an evocative jazz guitar solo. There are even hints of Portishead in the melody and yet it all works, brilliantly. And worry not, it ends with a colossal Doom finale. It’s an album’s worth of content in one song, and we have a long way to travel yet.

An on it rolls in an equally spectacular fashion. ‘Dark Horse’ roars off into the desert with faster, heavier riffage in tow. There’s a thunderous twin guitar bludgeon over which Sara’s vocals soar effortlessly while ‘Orphalese’ has much more of that international vibe, you can almost see the heat hazed minarets shimmering in the distance. Is that an oud in there? A saxophone? The vocals, again, are hypnotic and spine-tingling. It’s calming, spiritual…is World Prog a thing? If not, it is now.

‘Rubedo’ has immense bottom end to the riffs, until, that is, it thunders off into an almost-thrash midsection. Messa then give us a moment to breathe with ‘Hollow’ – a minute of calming oud, birdsong and background chatter. A welcome opportunity to collect our thoughts before we storm into a devastating 1-2 of epics. Sara’s vocals in ‘Pilgrim’ (see above) are a velvet clad hammer. She wails to the heavens before a bowel-loosening riff piles in. It chugs mightily, guitars in unholy unison before a doom-o-rama finish.

The 10 minute plus ‘O=2’ begins with an almost Maiden-esque prog intro, the strummed acoustic guitar setting the scene almost visually before another fuzzed, Med infused riff appears. It’s expansive, ambitious, as mentioned before, it’s widescreen…no, make that imax. Is that a mandolin? There’s definitely saxophone this time, it’s free Jazz Doom. An instant modern experimental Art Doom classic…and you don’t get many of those.

‘Leffotrack’ is another palate cleanser, except this time it’s 45 seconds of Cookie Monster vocals and blast beats before ‘Serving Him’ ends the album on a gentler note. This is a stunning album, definitely Messa’s best yet and one that needs to be heard by anyone with an open mind and ears. It’s daring, visual, enthralling, beautiful and poundingly heavy…quite often all at the same time. Foreign travel is still a bit of a lottery at the moment so why not eliminate the risk. Pop on some headphones, press play and be transported. Oh let the sun beat down upon my face. 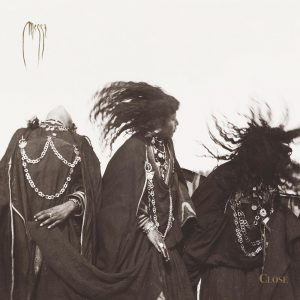