The late 1990s were a strange time for British indie/alternative fans.  The mainstream had been dominated by Britpop (a genre which was retro-fitted or attached to anyone from the UK with a guitar), and latched onto Blair’s Cool Britannia as a sad parody of 1960s inventiveness.  But as bands like Pulp and Blur unshackled themselves from that millstone, and Oasis brought out the stodgiest, most coke bloated album of the era, something unsettling happened.  In 1997 (when the NME Albums of the Year list mattered to people), one of the most critically acclaimed albums of the year was American and filled with a depth and charm that had been missing in music for a while.  Deserter’s Songs by Mercury Rev continued where the Spiritualized’s Ladies and Gentlemen We Are Floating in Space had left off in 1996, and where Flaming Lips continued in 1998 (and what most of us thought Grandaddy would do with Software Slump in 1999).  It was a majestic sweep of strings, noise guitars and rolling timpani.  Jonathan Donahue’s vocals resurrected that reedy Neil Young tone used by Daniel Johnston, Mark Linkous and Wayne Coyne for the general public to enjoy, after years of being drowned out by cockney sing-alongs and plastic Mancs.  The question was- what now?

In the early 2000s where most indie bands sounded like they were from New York in the late 1970s, and the only British band the NME cared about was Terris (remember them?  No?  Good) Mercury Rev released All Is Dream, an album with the same overall atmosphere as their previous record but more polished, and no worse for it.  In fact, the album was better- which many didn’t think was possible.  Deserter’s Songs was moving and lush, but it did contain at least three needless interludes and at least one duffer (sorry, but “Hudson Line” isn’t a great tune), and yet All Is Dream lacked any filler at all.  Every song was perfectly crafted, whether it was the snappiest of singles (“Nite and Fog”), the broodiest of sonic explorations (“Lincoln’s Eyes”) or just a string of damn fine melodies (“Chains”).  It was symphonic without being pompous.  It never toppled into insincerity.  Even the most 2010s sounding moment, “Little Rhymes” (10 years ahead of its time) alluded to something like Temper Trap without just being bog standard indie disco fodder.

Last year Cherry Red released a lengthy 3CD remaster of the album containing the original recording, a CD of rarities, B-sides and demo versions, and a live album.  That set (minus the live album) now- finally- comes as a lovely red and black marbled double-vinyl edition.  For many, it’s great to hear the rare stuff.  For some, it’s a chance to own this beauty on vinyl.  The demo versions of “A Drop In Time” and “Hercules” show you the simpler origins of the album tracks, and some of the material not on the original could easily have been included alongside or instead of some of the weaker (but not weak) moments on there (“Cool Waves” and “Mascara Tears” in particular).  The cover of “Lucy in the Sky With Diamonds” is pleasant, but largely unnecessary, especially when you realise that there’s a flippin’ Chopin cover on there.  That’s way more interesting for a band like them to do than just another Beatles cover.  It just goes to show that The Rev will always keep you guessing.

If you’ve never dug yourself into a Mercury Rev-shaped hole, then this isn’t a bad way to begin.  Backwards steps towards Deserter’s Songs and the scuzzier sounding Boces and Yerself Is Steam are worthwhile, but this album possibly stands as the apex before the slow decline in the albums that followed.  Nothing has quite topped this, and the fact that even the rare stuff can be jaw-dropping is evidence of what a necessary addition these guys were (and still are) to music itself.
Words by Angri Peters 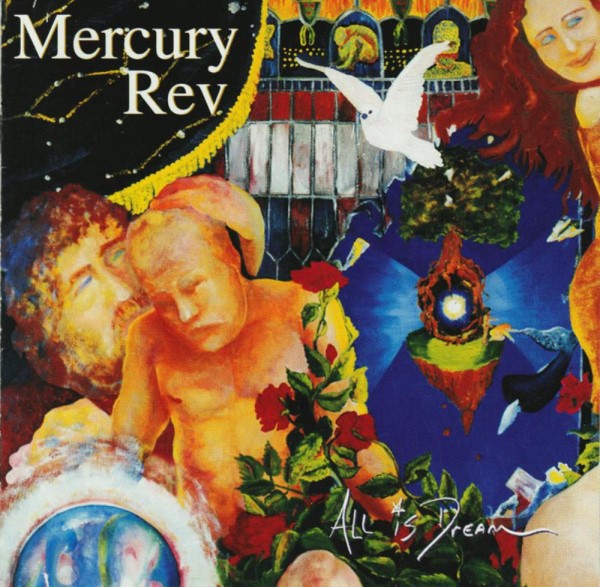