Melvins unpulgged, now there’s an idea. We’d had hints of how this would go down from Buzz Osborne’s 2 acoustic solo albums, but this is on another level – and then some. Never a band to do things by halves, alt heroes Melvins have recorded an acoustic retrospective, and it’s genuinely a beast of a thing. Spanning their entire career, this mammoth release offers 36 tracks over 2 CD’s (or 4 albums!) and is an object lesson in how to perform heavy music in an acoustic setting.

So, no scarves and candles and mellow nod-out grooviness here, oh no, this album is heavy. Long, brooding, intense, slow and possessed of an oceanic depth and pressure, listening to this behemoth in one sitting is a marathon, an spiritual journey, and it simply does not loosen it’s vice-like grip on you, not for one moment. You need to decompress after listening. In the words of main man Osborne, “it’s like going to war against an army of gorillas on LSD”. Well, quite.

Let’s dissect track one. ‘Edgar The Elephant’, from 2017’s ‘A Walk With Love and Death’. The sound is established immediately – heavy, like the heaviest Delta blues, like Son House and John Lee Hooker. Totally uncompromising – the arrangement is brilliant, giving no concessions to the acoustic format. Laid back this ain’t. The sound is nice, roomy, dirty, thick. There are subtle hints of psychedelia too, and some nice mop top vocal harmonies. At one point the song stops dead – for slightly longer than you expect, you’re briefly on edge…then it kicks back in again. This happens a lot throughout the album, the dead air seems to get longer, almost as if they’re toying with us.

Oh, and the drums. I don’t know what Dale Crover is on but he’s an absolute beast throughout these 36 tracks. It’s his album. Drum afficionado’s – sit back, pour yourself a generous whisky and enjoy, you’re in for a treat. In keeping with the albums acoustic ethos he’s forsaken wooden stick and played with brushes throughout which was, in his words, “a pain in the ass”. But the results. These drums could level mountains – how does someone playing with brushes manage to sound as monumental as John Bonham? Yep, Crover’s performance is that good.

And off we go. The album is a treasure trove of delights. There are bluesy flourishes, acoustic pop ditties, 60’s psyche…but shot through a 90’s grunge barrell…messily, early Beatles style tear-ups, extended grooves and, I swear, a xylophone at one point! There’s strange, loose, FX-driven jam things, acoustic metal, Who-esque chaotic rampages, lot’s of dissonance and a shit load of classic Melvins quirk.

And that still doesn’t even begin to cover it. ‘Hung Bunny/ Roman Dog Bird’ is a 12 minute monolith of a thing. It kicks off with a huge, clattering intro that repeats ad infinitum before finally hitting a groove. Then we head into a serious Doom segment. It does that stop dead thing we mentioned earlier…several times, before droning to a finish with some huge riffage. It’s looooong, but in a good way.

‘With Teeth’ is loaded with ill intent and heads into a molasses-thick sludgy metallic chug while the 7 minute reading of ‘Boris’ is simply cavernous, Buzz’s downtuned strings seem to positively rattle before heading off into a final, lone death wheeze.

Oh, and the covers. ‘Evil Flys’ is cinematic. A fucked up film noir lifted by jazzy drums (but still poundingly heavy) which segues into a levaithan take on Free’s ‘Woman’ – it’s unexpected,surprising and brilliant…and, you guessed it, heavy. Disc one (or album two) closes with an epic version of Alice Cooper’s ‘Halo Of Flies’. full of peaks, troughs and movements, it’s an acoustic Doom/Sludge/Shock Rock/Prog wig out!

At the albums mid point (or heart) is a faithful cover of the Rolling Stones ‘Sway’ – again, surprising and brilliant but possibly freakiest of all is former bassist Jeff Pinkus joining the fray for a somewhat wired, booming version of ‘Everybody’s Talkin’. Who’d have thought it, but then, this is the Melvins so, in a fucked up way, it makes all the sense in the world.

Which is pretty much what this album is about. If you’re a Melvins fan you’re a fan for life, you’re in for the long haul and that’s this album in a nutshell. It’s an endurance test, but a frikkin’ great one. It redefines how you think about acoustic music while busily going about being a killer acoustic album. The musicianship, arrangements and production are all outstanding but seriously, Crover needs some kind of knighthood for his performance here, it’s…ach, just go and listen to it, he needs to be heard to be believed. There aren’t many bands who have been at the coalface for almost 40 years who are still this consistently brilliant, who aren’t just resting on their laurels but are still out there, producing some of the best work of their careers, and this, this, is one of their best yet.

Released by Ipecac Recordings on 15 October 2021 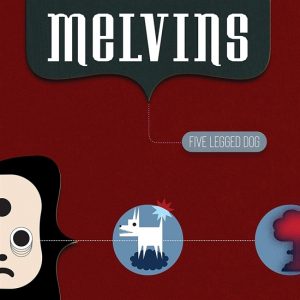