Two years of lockdown with only two gigs during that time in Tokyo, Melt Banana are back on tour and back on stage in Birmingham. And once more, the Hare & Hounds is subject to their manic, maniac, mighty mind-mangling eruptions. Intense immediately, Yako is again armed with her electronic arming device that triggers noise after noise after beat after blast as she spatters, sputters and splutters out her cartoon-esque vocals. And Agata strangles all kinds of sounds out of the stringed plank that hangs over his shoulder as his hands bash, bend and threaten to break the strings while he tap-dances across his board of guitar effects pedals and sound processors to produce a cacophony of melodious maladies.

Long songs, fast songs, very short songs that are upbeat, down deep, hyper speed and hyper sonic, with and array of bleating bleeps, fuzzy warbles and slam-dancing beats, the head-throbbing infectious music machine that is Melt Banana soon gets the crowd moving. A pit soon forms and the evening quickly becomes a blur of sonic devastation and grooves that make your booty move. Exhilarating, exuberant, energetic, and brimming with a beautiful madness, like the last time they played this venue in October 2019, everyone left the room happily deaf, the wave upon wave of demented opulence that the duo inflicted upon this desiring crowd ringing loud and long in their ears. Now that the lockdown rules have all but vanished, I suspect we may be seeing Melt Banana very soon. Certainly hope so… and with a new album perhaps? 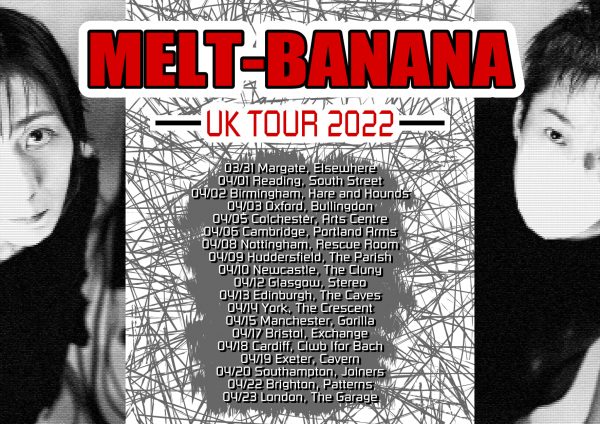