Another Iconic AOR singer passed away this month, Fergie Frederiksen following a lengthy battle with cancer, he was 62. Frederiksen may be best known for his time with Toto, but was extremely popular as a solo artist and various other projects as well as cult AORsters Le Roux. R.I.P Fergie, our thoughts are with his friends and family at this sad time.

Download Festival has announced another batch of bands for the 2014 festival, amongst them Tesla, Skid Row and the most surprising and intriguing addition of Danger Danger! 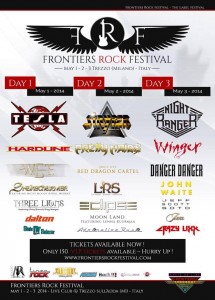 Frontiers Records have just announced their own label showcase festival, Frontiers Rock Festival. It will be happening on May 1st through May 3rd in Milan, Italy. It’s a shockingly good line-up

American funk rockers Extreme are coming back to the UK for a string of live dates to celebrate their mega selling album ‘Pornograffati’. They hit the HMV Institute in Birmingham on the 7th July.

Swiss rockers Gotthard are back with Bang! on April 4th with their brand new album. Given the current popularity of the band I’m sure this will be causing a stir in anticipation of its release, especially following the very mixed reviews and reaction to their last album and new vocalist.

Legendary Midlands rockers Magnum will be having a special album launch party for their forthcoming album ‘Escape From The Shadow Garden’. Set to take place at The Robin in Bilston on March 25th.

Tyketto have announced original guitarist Brooke St. James will be unable to play with the band on their forthcoming 2014 live shows due to other commitments. Stepping up on guitar is well respected UK but now US-based, guitarist Chris Green, who many will know from Pride, Furyon and Rubicon Cross.

Winger’s brand spanking new album due this spring via Frontiers Records will be called Better Days Comin’, let’s all keep everything crossed for some UK live shows!

Increasingly popular Scandinavian rockers H.E.A.T’s forthcoming fourth album Tearing Down The Walls will be released during March and will be preceded by the single ‘A Shot At Redemption’.

Swedish hard rockers Skintrade will release their new album through AOR Heaven on February 28th. The band features the vocals of well loved vocalist Matti Alfonzetti (Jagged Edge / Red White & Blues). Refuelled will feature the songs ‘Pay In Blood’, ‘Getting Away With Murder’, ‘Worse Than Wasted’ and ‘Dying In Your Arms’.

Journey guitarist Neal Schon will have a new album out on Frontiers Records in 2014 – more details as I hear them!

Reuben Archer has a few live dates coming up in March to promote his solo Personal Sin album, including a show at Newhampton Arts Centre in Wolverhampton on March 22nd.

Parody shock rockers Steel Panther return with a new album All You Can Eat on April 1st. Here’s a sample of some of the song titles that will feature on it, ‘Party Like Tomorrow Is The End Of The World’, ‘Gang Bang At The Old Folks Home’, ‘The Burden Of Being Wonderful’ and ‘You’re Beautiful When You Don’t Talk’. They also hit the UK for a few shows including Lincoln Engine Shed on 14th March and Wolverhampton Civic Hall on 15th.

German power metallers Edguy have snuck secretly into the studio and have revealed they have been recording the follow up their 2011 Age Of The Joker album. It is predicted the album will be released in early 2014.

Skin & Bone have launched a ‘Crowd Pledge’ campaign for their debut album, like many Pledge/Fan funded campaign sites; there is a nice selection of optional goodies as well as the standard album option. Check it out here…

Jeff Scott Soto approved rockers Danger Angel have a brand new lyric video out now for their song ‘Decadence’. Check it out below!

Progressive metallers Vanden Plas have a new album Vision Three out on Frontiers Records soon; here is their first official video from it ‘Godmaker’.

Finnish rockers Free Spirit have released their second single ‘Hysteria’ from their forthcoming second album All The Shades Of Darkened Light. The song will be featured in a Finnish Werewolf film and you can check out the video – with pieces of the movie in it below.

The original Kingdom Come line-up have got back together, tour dates to be announced. I suspect this will be a US thing and possibly Big European festivals like Sweden Rock.

Black Country rockers East Of Eden have uploaded their forthcoming new single ‘Dirty Diana’ to their soundcloud page. It’s a rocked up cover of the Michael Jackson song and will be officially released on February 14th! They have also renamed themselves to EofEOfficial after original 70s folk band East Of Eden complained.

Do you like Rock Candy re-issues, well here’s a new bunch for you to dribble over this month! Dokken – Breaking The Chains, Tooth and Nail and Under Lock and Key, Tommy Shaw – Ambition, Kerry Livgren – Seeds Of Change and Speedway Boulevard – S/T.

Here’s the latest official video from Jake E Lee’s Red Dragon Cartel for the track ‘Deceived’. The debut album is out now on Frontiers Records.

L.R.S is a new project band featuring the return of cult vocalist Tommy LaVerdi (21 Guns)! He is joined by guitarist Josh Ramos (The Storm, Hardline) and Canadian drummer Michael Shotton (Von Groove). Their debut album Down To The Core is set for release in March via Frontiers Records the album is produced by the extremely busy Alessandro Del Echo. Song titles to be included are ‘I Can Take You There’, ‘Almost Over You’, ‘Shadow Of A Man’, and ‘Waiting For Love’.

Adrenaline Rush is a new Scandinavian female fronted rock n roll band recently signed to Frontiers Records. The album is produced by Erik Martensson of Eclipse / W.E.T and the album should be released in the summer. It will be preceded by a single and video in the spring for their track ‘Change’.

Def Leppard are to release a re-issue of their much maligned 1996 album ‘Slang’ at the beginning of February. For me it’s a must have album for all Def Lep fans and it does contain some stunning tracks and bar their greatest hits album released the year before, this was the first Def Lep album I brought so has a special place in my memories much like Bon Jovi’s ‘These Days’! Look past the reputation of ‘Slang’ give this one a spin and make your own mind up!

Danish rockers Pretty Maids will release a new album entitled Louder Than Ever via Frontiers Records at the end of March. This new album is actually a collection of re-recorded Pretty Maids songs and four new songs.

It has been confirmed the next two albums in the ‘Lost UK Jewels’ series will be from Voyager UK and United Nations, which will feature Black Country vocalist Lee Small.

Brand new Swedish melodic rockers Reach have just released their debut single and unveiled their video to accompany it, check out ‘Black Lady’!

Escape Music have signed a brand new European female fronted band called Linda & The Punch who are described as a cross between Pink & Pat Benatar. The debut album is out in March and will feature some of the following tracks ‘Wake Up Dreaming Of You’, ‘Nothing Of Anything’, ‘Kill The Lights’ and ‘Love Kills Me’.

Timo Tolkki has announced all the guest musicians who will feature on his upcoming Avalon album Angels of the Apocalypse which is due out on Frontiers Records in May. Amongst the guest vocalists is Simone Simons (Epica), Floor Jansen (Nightwish) and Elize Ryd (Amaranthe) amongst others.

Motley Crue have announced their next world tour will be their last ever, even signing a contract that will mean they will be sued if they try to tour again (by whom I’m not sure!). They have announced their US and Canadian dates with support from Alice Cooper, UK dates are still yet to be announced.

Black Star Riders have announced they will be working with Def Leppard vocalist Joe Elliott on their next album which is slated for release in 2015. Elliott will produce the album and it’ll be released via the Nuclear Blast label.

Z Records have announced their release schedule for the first half of the year. Starting with two re-issues in February Von Groove – S/T and Damned Nation – Grand Design, March sees a new one from US rockers Moms Rocket – V2, April will welcome another album from Legion – Tempest, May will see another re-issue from Paul Sabu – Between The Light and the third as yet untitled album from Escape will emerge in June.

The new album V from Ferreira will be released via MelodicRock Records on March 17th pre-orders will be available soon with a promise of definitely receiving the album prior to its official release date.