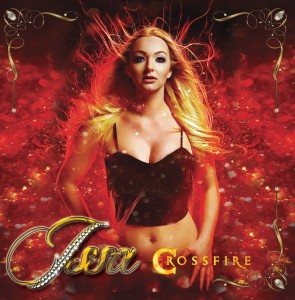 AOR legends Toto have released the video to their new single ‘Orphan’ and I think you’ll all agree it’s pretty damn awesome. I can’t wait for the new album XIV to be released in March on Frontiers Records. Crank it up and put it on repeat….nice…

British Legends FM will release their forthcoming album Heroes & Villains will be released via Frontiers Records on April 20th. The album will include the following tracks ‘Life Is A Highway’, ‘Fire and Rain’, ‘Call On Me’ and ‘Walking With Angels’. FM also hit the road in the coming months including HRH AOR in North Wales and a debut appearance at The Robin in Bilston on Saturday May 2nd both of which I’m really looking forward too.

My album of the year is about to be released it’s the new one from the rather amazing Issa – Crossfire. She wrote the album with The Martin Brothers and is pretty damn awesome; seriously this will be my album of the year. Well she has released her first video to promote it for the title track, enjoy and remember the album is out in a couple of weeks.

Tony Harnell and Magnus Karlsson have announced they will join forces again for a new Starbreaker album to be released in early 2016 on Frontiers Records. I know this will cause a lot of excitement and anticipation; I know I’ll be keen to hear a new album from these guys.

Many of us enjoyed the collaboration of Michael Kiske and Amanda Sommerville when they released a self titled debut album through Frontiers Records five years ago. So I’m sure many will be looking forward to their forthcoming second album City Of Heroes which will be released in April on Frontiers Records.

Exciting rockers Halestorm will release their new album Into The Wild Life in April. As a long standing fan of these guys I’m really looking forward to this new one and their debut black country live appearance at Wolverhampton Civic Hall on March 9th. Which also super excited about as it will be my first time seeing them live! They have released an audio video for the track ‘Apocalyptic’, enjoy it below.

I absolutely adore Degreed and they released a lyric video featuring a demo version of ‘Kill Your Darlings’ which will be on their new album. Crank this one up it’s a little bit awesome…

Brum based AOR singer David A Saylor will have a new solo album out this year on AOR Boulevard records entitled Built To Fight. He has already filmed and released the title track for our enjoyment, check it out!

UK rockers VEGA have announced a one-off UK headline show at the Rescue Rooms in Nottingham on April 4th. They also filmed a new video featuring footage from their live shows last year as well as their supports with Melodic Rock legend Joe Elliott and his Down n Outz; check out ‘Gonna Need Some Love Tonight’ below.

Another exciting Swedish melodic rock act Grand Slam have signed to AOR Heaven. Check out their video for ‘Face’ and you’ll quickly understand why I’m chomping on the bit to hear the full album.

Sleazy rockers Santa Cruz will release their self titled album on March 10th via Spinefarm Records. Tracks to be included are ‘Bonafide Heroes’. ‘We Are The Ones To Fall’; ‘Can You Feel The Rain’ and ‘My Remedy’. Check out the video to the tasty ‘Wasted & Wounded’ below.

Ged Rylands Rage Of Angels have announced they have pulled out of their scheduled live performance at HRH AOR, where they were set to headline the Thursday night pre-party. The reason stated is that the band is hard at work recording their second album at the time and won’t be able to make the show.

As previously reported the Scorpions will release their brand new album Road To Forever on the 23rd of February. It includes the single ‘We Built This House’ and also ‘Going Out With A Bang’, ‘House Of Cards’ and ‘All For One’. Sadly the accompanying world tour will feature one UK date and even more disappointing for us Midlanders it couldn’t get any further south unless it moved to France! But for those interested the Scorp’s solitary UK date is as part of the Ramblin Man Festival. I do hope 2016 may see them return to the UK as I loved their show at Wolvo Civic a few years ago.

Magnum are always busy one way or another, and as they are one of my favourite bands that’s always good news in my book. They are back down Mad Hat Studio’s recording their 19th studio album as you read this. 2015 is expected to be a Festival heavy year for Magnum with a few already confirmed for the summer, but given that the band is extremely active live I’m sure occasional dates here and there will always pop up.

Do you guys remember Sacred Heart? Well Paul Stead and Mark Stephenson from that band are back in the saddle with an all new band The Darker My Horizon and you can check out their new lyric video for ‘In The Dark’ below.

AOR super group Revolution Saints release their second promo video from their upcoming debut album. Check out ‘Back On My Trail’ below.

Scottish rockers GUN will release their new single ‘Labour Of Life’ and new album Frantic on the 23rd of March. GUN hit the Midlands with a show at The Slade Rooms in Wolverhampton on the 25th March. Come and join me down the front!

One of the most respected and popular AOR songwriters of all time is Jim Peterik of Survivor. Well he has teamed up with vocalist Marc Scherer for the Peterik/Scherer album Risk Everything which will be released on Frontiers Records in April.

Ex- Diamond Dawn vocalist Alexander Strandell has formed a new band Art Nation and they have signed to AOR Heaven. Check out the video to their single ‘One Is Better Than No One’.

Eden’s Curse will release their live album Live With The Curse on the 13th March on AFM records. It was recorded at The Classic Grand in Glasgow on November 28th the album was mixed by long time engineer Dennis Ward (Pink Cream 69). Check out the first promo video for the album ‘Rock Bottom’ below.

I’ve always been a big fan of Dutch melodic rockers Terra Nova since I discovered them in the nineties. So it’s exciting to see they have a new album out soon on Melodic Rock Records, Reinvent Yourself will be released on 23rd March. It will feature the following tracks ‘Meltdown, ‘Shadow Man’ and ‘Promises’.

Maxx Explosion who feature three quarters of the current House of Lords line up will release their second album through Kivel Records. Dirty Angel will be released at the beginning of March.

The new Dan Reed album Transmission will be released via AOR Heaven on March 27th.  It will feature the following tracks ‘Broken Soul’, ‘Drive’, ‘Anywhere But Here’ and ‘You’re All I Need’.

Mark Slaughter has released his debut album Reflections In A Rear View Mirror. It includes the following tracks ‘Away I Go’, ‘Never Givin’ Up’, ‘Don’t Turn Away’ and ‘Deep In Her Heart’.

This intriguing new signing to AOR Heaven really need checking out especially if you are into the softer side of melodic rock. Windsor Drive will have their debut album out on March 27th and will feature the following tracks ‘Going Under’, ‘Sleepwalking’ and ‘Drive Under The Weather’.

Y&T have announced their UK tour and as per usual they never leave the Black Country out, they return to the Robin in Bilston for the third year on the bounce on the 30th of October. Following the packed crowd last year I highly recommend you get your tickets early, see you down the front.

Counting Crows will be playing a one off exclusive show this year at Wolverhampton Civic Hall on June 10th. It’s really cool to see this amazing venue acknowledge by the band for this solitary 2015 performance by the popular American rockers. The Black Country Rocks!

Cult AOR-ster’s Drive She Said (Mark Mangold and Al Fritsch) will return with a new album in early 2016 on Frontiers Records.

Impellitteri will release their latest album Venom on Frontiers Records in April. A few tracks set to feature are ‘We Own The Night’, ‘Face The Enemy’, ‘Dominoe Theory’ and ‘Rise’.

Wigelius have signed to AOR Heaven and are set to release a new album in the summer of 2015. A Video for the track ‘Time Well Wasted’ which is on the new album can be viewed here.