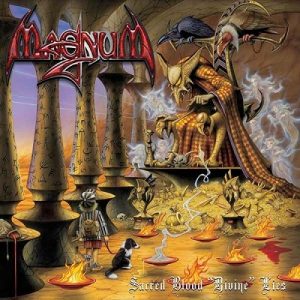 Firefest have announced their return via a short teaser video clip. No details are known at this time other than it will happen in 2016. Although the safe money would be on Nottingham Rock City in October.

I’m very excited to hear that Niclas Olsson has been in the studio again with vocalist Anette Olzon. The pair worked together in Alyson Avenue prior to Anette joining Nightwish, the pair are working on AOR compositions in the Alyson Avenue style, whilst nothing is certain there is potential for a new AA album in the works. They have recorded a new version of ‘Without Your Love’ to celebrate the 15th anniversary of the Alyson Avenue debut album Presence of Mind.

The big news that’s on everyone’s lips on the moment is the shock announcement former Journey vocalist Steve Perry has a new solo album recorded and ready for release this coming March. It is only rumours at the moment, but feels like a solid rumour, so keep your ears peeled for official announcements early next year.

Tango Down are set to release their fourth album Bulletproof next April on Kivel Records.

The prolific Last Autumns Dream will release their next album Paintings through AOR Heaven next February. The album will feature the following tracks ‘Out Of Love’, ‘Too Late’, ‘An Eye For An Eye’ and ‘Bitter Blue’.

Totally out of the blue Heart have announced a string of UK live dates for the summer of 2016. These dates include July 3rd at the Symphony Hall in Birmingham, fully expect the ticket prices to have you choking on a drink especially if these dates sell out and the legal ticket touts ask you to bend over and take it (Isn’t it about time laws and regulations were put in place to put an end to these dirty robbing bastards whose extortionist prices are hurting the live music scene!).

Halestorm have released a new video from their latest album Into The Wild Life and it’s for my favourite tune from the album ‘I am the Fire’ which I thought was awesome when I saw the band earlier this year at Wolverhampton Civic Hall. Play this one loud!

Frontiers Rock Festival have announced more bands that will be part of the festival taking place next April. They are The Defiants, The Treatment, Terry Brock, Find Me, No Hot Ashes, Drive She Said, Blood Red Saints and Graham Bonnett Band. A special acoustic evening has also been announced with sets from Kip Winger, Claus Lessman / Michael Voss (Phantom 5), Paul Laine, Terry Brock / Mark Mangold and Robbie Le Blanc. The headliners will be Last In Line and a special one off reunion show from Talisman.

Nordic Union are a new musical collaboration between Ronnie Atkins (Pretty Maids) and Erik Martensson (Eclipse). They will release their self-titled album via Frontiers Records in January. Songs set for inclusion are ‘Every Heartbeat’, ‘True Love Awaits You’, ‘Go’ and ‘The War Has Begun’. Check out the audio video for ‘When Death Comes Calling’ here.

and here’s another for ‘Feels A Lot Like Love’

Primal Fear have released a new video and song from their new album Rule Breaker which will be released in January on Frontiers Records. You can enjoy ‘The End Is Near’ below.

and here’s an audio video for ‘In Metal We Trust’

Johnny Lima is releasing a new acoustic album via his website called Unplug and Play. He’s taking pre-orders, visit Johnny Lima to order yours. It will include the following tracks ‘I Got The Girl’, ‘So Excited’, ‘Feel What It’s Like To Be Loved’ and ‘Nothing’s Worth Losing You’.

Swede’s Grand Slam will release their new album A New Dawn through AOR Heaven in January. The band have built up some notoriety in their homeland after appearing on a ‘Britain’s Got Talent’ style show. The album will feature the following tracks ‘Face’, ‘Light Up The Sky’ and ‘One Way To Heaven’.

Wigelius will release their second album Tabula Rasa through AOR Heaven in January. It Will feature the tracks ‘Déjà vu’, ‘Do It All Again’ and ‘Run With Me’.

Impellitteri have released a new music video for the track ‘Face The Enemy’ which is lifted from their album Venom which was out earlier this year on Frontiers Records.

Last In Line will release their debut album Heavy Crown in February on Frontiers Records. The band features three former Dio band members who formed the band to pay homage to the late great Ronnie James Dio, the new album will feature all new compositions that have a nod to the classic Dio sound. Tracks set for inclusion are ‘Starmaker’, ‘Burn This House Down’, ‘Blame It On Me’ and ‘Curse The Day’. Check out the first video for the track ‘Devil In Me’ below.

Popular Swiss hard rockers Shakra are back with a new album High Noon in January, it will also mark the return of vocalist Mark Fox to the fold.

Snakecharmer the band formed by former Whitesnake alumni with Chris ‘Heartland’ Ousey on vocals have parted ways with Micky Moody who goes on to new horizons. Which is a shame as the band are a dynamite live act but hopefully they’ll continue and finally get around to doing that second album!

Khymera have released another audio video from their recently released album The Grand Design. Check out ‘Say What You Want’ here.

and here’s another for the title track

New UK blues based classic rockers Inglorious have released their first proper music video for the track ‘Until I Die’. It’s the opening cut from their self-titled debut album which will hit the streets next February on Frontiers Records. Crank it up below.

Eclipse have parted ways with drummer Robban Back, who moves on to chase new musical ventures. Their new drummer will be Phillip Crusner. They have also announced they will be taking part in Sweden’s Eurovison song contest.

The Amboaje debut album All About Living will be released on Melodic Rock Records in January. I’m looking forward to getting this one it promises to be one of the strongest albums of 2016!

Check out the first single and video ‘Ruins’ from Eternal of Sweden taken from their forthcoming album Heaven’s Gate which is scheduled for release in January.

HRH AOR on the road, a series of live shows using this moniker are scheduled for next March. This package tour will be headlined by The Quireboys with support from Faster Pussycat, Bonafide, The Texas Flood, Thirteen Stars and Skam. A Midlands date will happen at the O2 Academy in Birmingham on March 26th.

Popular Finnish ultra melodic rockers Reckless Love return to the UK in March with a show at The Slade Rooms in Wolverhampton on Saturday 5th March.

The new line-up of Bonfire have released a music video for the track ‘Nothing At All’. Which is lifted from their latest album ‘Glorious’, check it out here.

Whitesnake have released a new official video for the track ‘The Gypsy’ taken from the ‘Snake’s latest album The Purple Album.

Find Me have released an audio video for the track ‘Midnight Memories’ which is taken from their recently released album Dark Angel. Check it out below.

Melodic Rock legend Paul Sabu has been working with guitarist Vince O’Regan on an all new album which will hit the shelves in early 2016 on Z Records. A Single ‘One Way To Love’ will be released digitally in January ahead of the full album release.

Melodic Rock Fest 2016 Australia will take place next May in St Kilda, Melbourne. More details will be announced shortly.

Legendary Canadian AOR heroes Boulevard have released a new live DVD Live From Gastown on Rocktopia Records. This extremely limited edition release features all their hits plus a couple of new songs set to be included on their all new album due for release in 2016. You can pick it up from Rocktopia or directly from the band Boulevard.

Resurrection Kings have released an audio video for the track ‘Distant Prayer’ which is taken from their self-titled debut album due in January on Frontiers Records. Check it out here.

Colour of Noise, featuring members of Little Angels and Furyon have released their first video from their debut album. Check out ‘Can’t Take It With You’ here.

Rick Springfield will release his 18th album Rocket Science in February via Frontiers Records. The album will include the following tracks ‘That One’, ‘Miss Mayhem’ ‘All Hands On Deck’ and ‘(I Wish I Had A) Concrete Heart’. You can check an audio video for ‘Light this Party Up’ right here.

Austrian female fronted pop rockers Cornerstone are hard at work on a new album with Harry Hess (Harem Scarem) involved. The band have live dates booked in England and Germany with more to be announced shortly. The album has a working title of Reflections and has a predicted May 2016 release date. They have also entered the Eurovision Song Contest, for Austria, with the power ballad ‘Whatever’.

UK rockers The Treatment will release their third album Generation Me in February through Frontiers Records. The band now features Midlander Mitchell Emms, who has been in a few bands and found a modicum of fame on The Voice a couple of years ago. The album will feature the following songs ‘Let It Begin’, ‘Tell Us The Truth’, ‘Backseat Heartbeat’ and ‘I Know She Knows’.

Rage of Angels have just announced their second album The Devil’s New Tricks will be unleashed in February on Escape Music. The big news is it will feature one vocalist – Rob Moratti.

Australian AORster’s White Widdow have resigned with AOR Heaven for a fourth album set for release in 2016.