Legendary AOR vocalist Jimi Jamison died suddenly of a heart attack on 31st August. The shocking news has been felt hard in the melodic rock world and he will be sorely missed. Our thoughts are with his family and friends at this time. Jamison is probably most well known for his time with Survivor. As well as Survivor’s ‘Burning Heart’ which was featured in Rocky 4; as a solo artist he provided the Baywatch theme tune ‘I’m Always Here’. R.I.P Jimi. 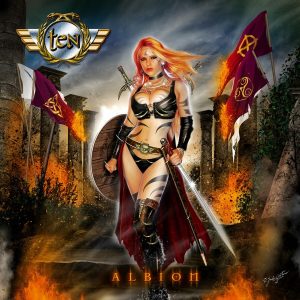 Popular British Melodic Hard Rockers TEN will release their new album Albion on Rocktopia Records worldwide on November 21st. This will be the first album released on new European based label Rocktopia Records and the release of Ten’s follow up is already scheduled for release in spring 2015 on the label. The buzz surrounding the album states the band has returned to the sound of the early albums.

Styx’s Dennis DeYoung will release the live album And The Music Of Styx live in Los Angeles via Frontiers Records on October 20th.

Mr Big have announced Pat Torpey’s stand in drummer for their forthcoming live shows is Matt Starr from the Ace Frehley Band. Torpey was recently diagnosed with Parkinson’s disease. Mr Big’s all new album The Stories We Could Tell will be released at the end of September. Read our review here.

Newman has re-recorded his acclaimed and hard to get debut album from 1997 and will release it as a limited edition in October. Pre-orders will be available direct from Newman’s website from the 8th September. It will feature 4 bonus tracks, ‘Backdoor Man’, ‘Crush On You’, ‘Love By Design’ and ‘Stand Up’.

Greek melodic rockers Danger Angel have announced their brand new singer, BJ, who will front the band for their third album. Many will know Brazilian BJ from his work with Jeff Scott Soto. They have released a brand new video and song to mark the announcement of – play ‘Will You Follow’ below.

A new British melodic rock act to keep an eye on is In Faith, which features singer Pete Godfrey, guitarist Tony Marshall and drummer Pete Newdeck. Their album will be released in mid-October on Rocktopia Records.

AOR Heaven will release British AOR-ster’s Angels Or Kings new album Kings Of Nowhere on October 24th. The band have been added to the HRH AOR 2015 line-up next March and the album will feature the tracks ‘Any Other Girl’ ‘Ice Turned to Rain’ and ‘Same Star’.

AOR Heaven will also release the new album from Scandinavian’s Bulletrain on October 24th. Start Talking will feature the following tracks, ‘Dark Eyes’ ‘From The Bottom Of My Heart’ and Nothing But Trouble’.

Frontiers Records have announced they have a new AOR super group featuring Journey’s Deen Castronovo, Night Ranger’s Jack Blades and Whitesnake’s Doug Aldrich. The project will be helmed by popular Italian producer/keyboardist Alessandro Del Vecchio. All three names are big guns and this yet to be named project should attract a lot of attention.

MelodicRock Records have announced a new signing – Xtasy. The Spanish band’s debut album Revolution will be released on October 13th. You can also check out the video for their song ‘Stronger’ below.

Following the departure of Reb Beach from the ranks of Whitesnake David Coverdale has announced Night Ranger’s Joel Hoekstra as his replacement.

Old favourites Jaded Heart has a new album due out at the end of September. It’s entitled Fight The System and featuring the tracks ‘I Lost My Faith’, ‘Never Free’ ‘Haunted’ and ‘Crying’.

Here’s another super group to grab your attention Red Zone Rider! The band features Kelly Keeling, Vinnie Moore and Scot Coogan. Their album will be released in mid September and will feature the tracks ‘Hell No’, ‘Cloud Of Dreams’, ‘Obvious’ and ‘Hit The Road’.

Legendary British pomp rockers Saracen return with a new album Redemption set to be released on Escape Music on September 19th. It will feature the tracks ‘Give Me A Sign’, ‘Geraldine’, ‘More Than Missing You’ and ‘Let Me See Your Hands’.

Greek AOR-ster’s Wild Rose who are fronted by David Saylor will release their third album Hit & Run via AOR Boulevard records on October 13th. It will feature the following tracks ‘I’ll Be There’, ‘Without Your Love’, ‘Can’t Wait On Love’ and ‘Don’t Walk Away’.

Niva have released a video for their track ‘Only You’ from their recently released album Incremental IV. I Absolutely love this track so crank it up and enjoy!

Stoke based melodic metallers Lawless are back in the studio recording their second album. It will be released through Escape Music in November. I’m very much looking forward to this one – These guys are supporting Pat McManus at The Robin in Bilston on October 21st!

Magnum will release ‘On Christmas Day’ as a single on October 24th; it will feature the track ‘Born To Be King’. This comes just ahead of their second leg of their European tour which will feature a show at The Robin in Bilston on the 5th December.

Faithsedge who have just released their second album The Answer Of Insanity have now released a lyric video for their song ‘Saving Anything’ to promote it. Check it out below.

It’s been a while but vocalists Russell Allen and Jorn Lande have teamed up again for a fourth Allen/Lande album. The three previous albums were written by guitar virtuoso Magnus Karlsson but for the fourth instalment we see the involvement of a new writer and producer Timo Tolkki of Stratovarious fame. The Great Divide will be unleashed on October 20th via Frontiers Records and will feature the following tracks ‘Come Dream With Me’, ‘Lady of Winter’, ‘Reaching For The Stars’ and ‘Bittersweet’.

Moonland who feature vocalist Lenna Kuurmaa of Vanilla Ninja will release their debut album on Frontiers Records at the end of September. They have just unveiled the debut video for the track ‘Heaven Is To Be Close To You’ which was written by album producer and song contributor Alessandro Del Vecchio.

New Italian melodic rockers Room Experience have announced their front man is popular English vocalist David Readman (Pink Cream 69). The main man behind Room Experience is keyboardist Gianluca Firmo and his production team of Davide Barberi (Wheels Of Fire/Charming Grace) and Pierpaolo Monti (Shining Line/Charming Grace). Given the names mentioned I’m very excited about hearing this album when it is released in early 2015!

House Of X formerly known as X-UFO will release their debut album via Escape Music on October 24th. The band features Laurence Archer, Danny Peyronel, Clive Edwards and Rock Newton – who have played with the likes of UFO, Wild Horses, Grand Slam, Lionheart and MSG. The album will include the following tracks ‘Do Me Wrong’, ‘Long Arm Of The Law’, ‘Rage’ and ‘Busted’.

Melodic Rock songwriter extraordinaire Tommy Denander returns to his Radioactive project. The fourth instalment will be imaginatively titled ‘4’ and will be unleashed in 2015 on Escape Music.

The Canadian legends that are Harem Scarem have come back out of retirement (Woooo Hooo!) and will release their thirteenth album Thirteen this autumn. They are funding the album via a Pledge campaign and it will be the only place to get the album and any of the other goodies available!

Adraingale follow hot on the heels of last year’s Suckerpunch with a new album Defiance due for release later this year on Kivel Records.

Nelson have announced their 2015 album Peace Out will be their last ever album of melodic rock under that moniker. It will be released sometime next year on frontiers Records. Matthew and Gunnar will then move onto their next project which will be in a country rock vein.

Work Of Art have released the first video to promote their forthcoming album Framework which will be out shortly on Frontiers Records. Check out ‘Can’t Let Go’ below.