When the queue to the Birmingham Academy stretches all the way back to the underpass you know there are some big hitters in town. Megadeth and Lamb of God may seem slightly strange bed-fellows but nevertheless their joint appearance was enough to see the sold out signs go up around the Academy.

Before the two heavyweights laced up their gloves for the closing night of their UK and Ireland tour, there’s more of a cruiserweight entering the ring first, in Children Of Bodom. It’s only fair to nail my colours to the mast and say I’ve been less than enamoured with the Finns on the various occasions I’ve stumbled across them. This though was one of their better nights and by the end even I had to attest that they’d put on a pretty good show for the faithful. Alexi Laiho turned down some of the histrionics to focus on the job in hand opening with ‘Silent Night, Bodom Night’.

Bodom have a new album out called I Worship Chaos, from which they performed one song; ‘Morrigan’. My unofficial hunch was that there were more LOG fans around than Megadeth but nevertheless with the occasionally overly precious Mustaine heading the bill it was the Virginia veterans who were next up.

Lamb Of God are rarely anything other than exemplary live, full-bloodied, passionate and honest. By inviting the crowd to ‘Walk With Me In Hell’, enigmatic frontman Randy Blythe was playing his cards with the assured confidence of a champion poker player. After the predictably explosive opener, and with the pit responding in kind, it was straight into another perennial Lamb of God crowdpleaser in ‘Now You’ve Got Something To Die For.’

Most metal bands playing Brum will pause to say a few words about Black Sabbath and Randy was happy to oblige, immediately dedicating ‘512’ from latest full-length release Sturm Und Drang to Ozzy and co. The digits by the way refer to Randy’s cell no during his well publicised period of incarceration in the Czech Republic.

After everything that the Richmond rebels have been through in recent years they are probably more sensitive than most to potential perils of the pit in full flow. So when Randy’s attention was taken by some frantic gesticulation emanating from its epicentre, he turned instantly to drummer Chris Adler with the cut sign.

What ensued was a delay due to a ‘man down’ and what initially seemed nothing too dramatic quickly escalated into something quite serious as an increasing number of security and medical staff raced into the pit to attend to the unfortunate victim. With Randy repeatedly urging the fans to give the person more breathing room it took a full 25 minutes before the fan was stretchered through the crowd to the exit doors where presumably an ambulance was by now waiting to whisk him off to a local hospital.

If Lamb of God had a slow song now would have been the time to play it. With no such thing up their sleeve they simply raced through ‘Redneck’ before signalling a hasty retreat. Although the crowd weren’t entirely happy, Randy did make clear they’d only had to cut the set short by maybe a single song or two, while Megadeth were now facing a later than anticipated start due to the untimely incident.

There’s something about Megadeth that has never quite sat comfortably with me. They seem to take life too seriously but worse than that also play up to the whole rock god thing, which these days seems passé. Getting a bunch of guys in their 50s – give or take a year or two – all with hair of a length that should keep the shampoo offers flooding in, is slightly incongruous.

A heart warming touch was to take to the Academy stage backlit with the French tricolour by way of an acknowledgement to the recent events across the Channel. It was then straight into ‘Hangar 18’. Megadeth, with LOG sticksman Adler back on the stool for his second stint of skin pummelling of the evening, are nothing if not old pros. Taking in plenty of favourites from their vast back catalogue, among them ‘Symphony Of Destruction’ there was just that feeling that they were going through the motions.

After Lamb Of God’s power show, Mustaine’s men looked a little laboured by comparison, both in terms of content and presentation.

Footnote – Having completed the UK/Ireland dates and travelling to Europe, Lamb of God decided not to continue with the tour in light of recent events. The other bands are trying to fulfil some of the planned Euro dates. 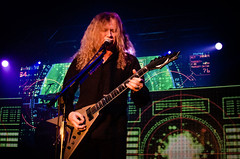 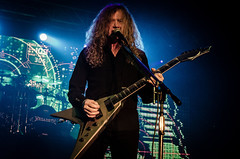 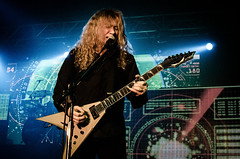 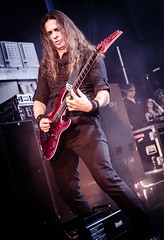 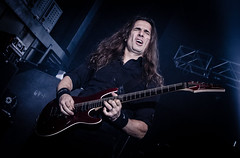 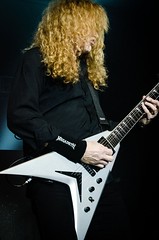 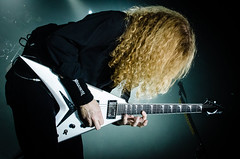 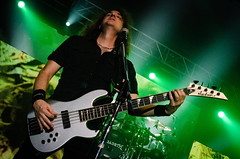 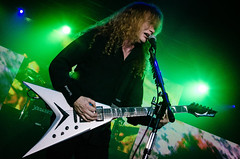 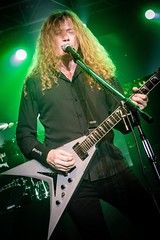 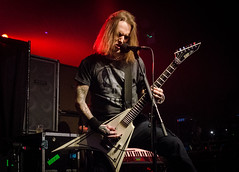 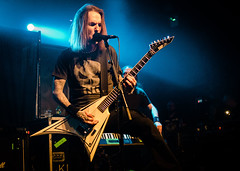 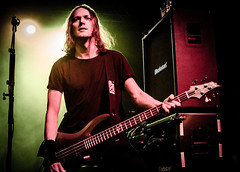 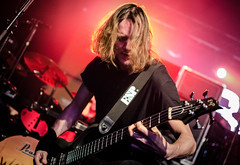 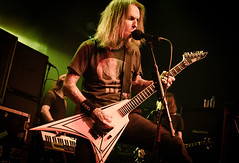 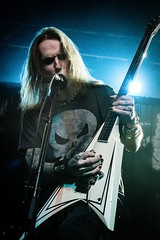 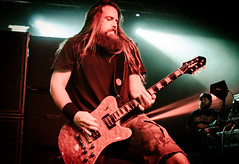 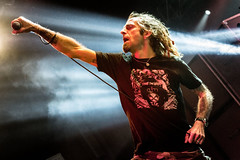 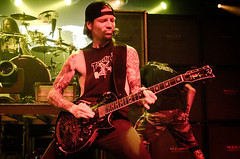 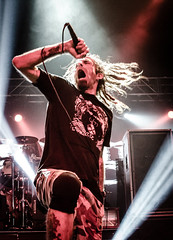 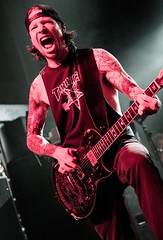 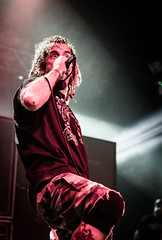