With a history of arson, murder and suicide Oslo’s Mayhem are probably black metal’s most controversial band (and that’s certainly saying something). Refusing to be shackled by genre constraints their career has been defined by a series of albums which have broken the black metal mould. Their latest EP, Atavistic Black Disorder / Kommando, is a transitional offering which sets one eye on the future with three original cuts and explores some deep roots with four ferocious hardcore punk covers.

On 2019’s Daemon Mayhem released an uncompromising, caustic album that offered little in the way of remorse. The three original tracks contained here were recorded during the Daemon sessions and, stylistically, continue in a similar vein. Opening to a swirling guitar motif ‘Voces Ab Alta’ soon bursts like a heavily leaden cloud and rains down all sorts of chaos. Time hasn’t diluted the band’s rage and drummer Hellhammer unleashes a brutal blast beat and barely lets up over the following five-and-a-half minutes. Attila Csihar’s vocals seem to emanate from the very depths of hades while guitarists Teloch and Ghul subtly alter pitch to deliver surgical lines that clash with a metallic crunch. ‘Voces Ab Alta’ could quite easily slot into its parent album and evidences the Daemon sessions as an embarrassment of riches.

Tortured cries herald the arrival of ‘Black Glass Communion’ and it’s a track that mixes up tempos and time changes with reckless abandon. Necrobutcher’s bowel loosening bass rumble is placed prominently in the mix which gives this number a decidedly punchy feel. It’s the type of song which is strangely disorientating (especially when experienced through headphones) as the drums spin the listener in quick rotation and the guitars, in ever decreasing circles, spiral downwards in diametrical patterns. While much black metal sounds brittle and frostbitten this EP is given a warm, rich production and ‘Everlasting Dying Flame’ sounds absolutely massive with the drums having a depth that seems impossibly bottomless and the band attacking as a unified force to pummel the listener into submission.

The choice of covers might surprise some but if you’re at all familiar with Mayhem then you should always expect the unexpected. For a band who’ve been accused of having right-wing leanings these tracks, originally recorded by anarchistic and pacifistic bands, are sure to raise a few eyebrows. However, when listening to the opening bars of ‘In Defence Of Our Future’ we can draw a direct correlation between the rage Discharge displayed and that found on Mayhem’s debut demo Pure Fucking Armageddon. With super clean vocals and some powerhouse drumming Mayhem claim ownership of the Kennedys’ ‘Hellnation’ while the anarcho-punk of Rudimentary Peni’s ‘Only Death’ becomes a monolithic stomping beast. These tracks work precisely because Mayhem impart their personality on proceedings and no more so than on the Ramones’ ‘Commando’. Given a distinctly crust punk vibe it’s straight in your face and full of aggro; it’s the musical equivalent of a one finger salute (typical of Mayhem’s career) and makes for a pretty apt closer.

Definitely an EP of two halves (hence the title) Atavistic Black Disorder / Kommando shows the dual facets of Mayhem. But they’re two sides of the same coin and whether your penchant is for black metal or hardcore punk you’ll revel in the seven tracks contained herein. 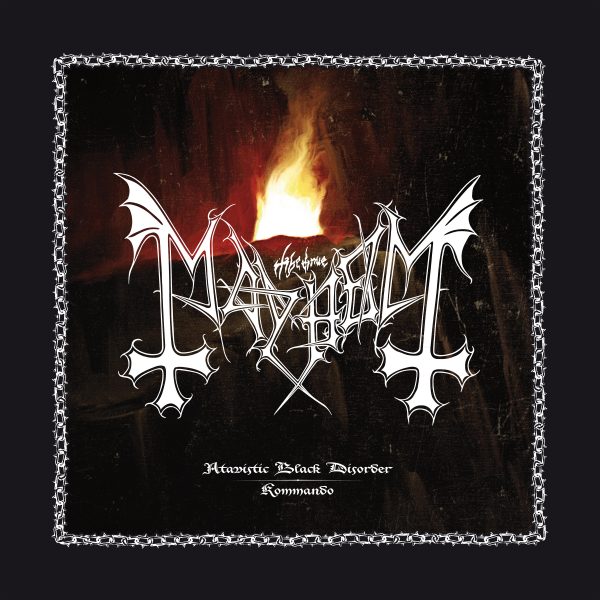