Watched the video? Good stuff huh. It’s all there – guitars, cool threads, black leather, kohl eyeliner, cards, a gravelly rumble of a voice and an attitude that can’t be faked or taught. Matty James Cassidy and ‘Old Souls’, his debut album, is an effortless masterclass in all those things that make rock ‘n roll a thing, no, the thing worth dying for.

Cassidy is a true troubadour, born and raised in Northern Ireland (where his formative years were spent gigging in every bar and club he could blag his way into) and now based in Manchester. He also has a pretty cool day job (we’ll get to that later). ‘Old Souls’ is a labour of love – written, produced and mostly played by the man himself, so, enough background waffle, let’s get to the music.

The album then takes it’s foot off the gas, takes a breath, and starts to stretch out. A few other styles begin to creep in. There are a couple of slower songs. Not ballads, they’re too tough for that, too broken, too whiskey-sodden. It’s country blues, punk folk. There are bruised, barroom love songs, wrapped in lonesome sax. There’s a nice, loose Stonesy feel to them, reminiscent of The Quireboys and, mostly, The Dogs D’Amour.

Oh yeah, the day job. Cassidy plays the bass for the current incarnation of Tyla’s ragged crew. So yeah, his DNA is clearly present in these songs, in those slower, all-alone-at-the-bottom-of-a-bottle-wonder-where-you-are-now laments. And damn good they are too. Faces good – sentimental but not, y’know, wussy.

But, above all this, this album rocks. Joyously, riotously, and, most importantly, coolly. There’s a Southern gothic menace to it all. Johnny Cash is nodding his approval, the whole sin and salvation thang is here in abundance, the devil looming over Cassidy’s shoulder. ‘Leave Your Heart At Home’ sees The Clash and The Dogs dukin’ it out outside a riverfront Belfast bar…in the rain. ‘After All’, meanwhile, tears it up, it’s badass, over-amplified rockabilly blues. Quiffs, tatts, smokes and shades that never get taken off, they’re all here.

There are some great curveballs too. The title track has elements of reggae and dub, except with really big guitars. It’s totally unique and proves that Cassidy is perfectly willing to go down some dark, strange alleyways. It’s a classy abstract groove. We finish with the awesome ‘Born Ancient’ (‘Old Souls’ – there’s a bit of a theme here) and it’s acoustic Celtic punk. Mandolins and bodhrans join the fray before wall-shaking drums kick things off into (another) epic chorus while a distorted guitar takes the place of what would have been a penny whistle. And there we are, 10 songs in just under 40 minutes, just as nature intended.

This is outlaw music is what it is. Rock, blues, folk, punk. Any fellow outsiders out there – pirates, cowboys, highwaymen, holy fools, loners, drinkers, writers, fuck-ups – give this a listen, your radar will twitch. He’s one of us and ‘Old Souls’ is as good as outlaw music gets. 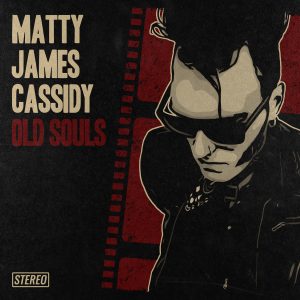