To celebrate their platinum anniversary Mastodon unleash a compendium of rare, live and unreleased tracks that’s a smorgasbord of all which is good and heavy. From prog to sludge to traditional metal Mastodon cover all bases without coming across as too eclectic and Medium Rarities perfectly showcases the bands multifaceted nature.

Opening this 16-track collection is the new and previously unreleased ‘Fallen Torches’ and, if you’re new to Mastodon’s humongous brand of metal, it’s the perfect introduction. With a riff Tony Iommi would kill for ‘Fallen Torches’ arrives like a landslide. However, it also evidences the bands use of light and shade, they’re not all about pure bludgeon, as clean vocals nestle ‘twixt guttural and airy keys float atop a pounding beat. An almost ambient midsection provides a moment of respite before the band return to club the listener with vengeance. Surprisingly, the band take on Feist’s ‘A Commotion’ and, like all good covers should be approached, turn it into something far darker and eerie.

With neat guitar lines weaving intricate webs ‘Asleep In The Deep’ is a soundscape that creates vivid images and reveals a subtle facet to the band often buried. It’s an atmospheric track that captured Mastodon at the height of their ‘water’ phase. The first of several live tracks on offer ‘Capillarian Crest’ allows the guys to show off their musical chops with drummer Brann Dailor hitting the skins particularly hard and guitarists Brent Hinds and Bill Kelliher showing some impressive interplay. A cover of The Flaming Lips’ ‘A Spoonful Weighs A Ton’ begins rather sedately before bursting into life with the force of an electrical storm that sends sparks flying in every direction.

With Brann, Brent and bassist Troy Saunders all sharing lead vocals many have lamented Mastodon’s lack of a dedicated vocalist giving the band a focal point but it’s a situation that works rather well. A quarter of tracks on this collection are instrumentals, implying that the band know when to step back and let the music do the talking or they tailor each vocalist to each song. If you need proof check out the brutal rendering of ‘Circle Of Cysquatch’ and the King Diamond like Squeals on ‘Cut You Up With A Linoleum Knife’. It also means Mastodon aren’t afraid to bring in outside vocalists and, as you’d expect, Gabby Haynes (from the Butthole Surfers) renders ‘Atlanta’ a little kooky.

Like walking into an opium den in America’s Deep South ‘White Walker’ is a genuinely spooky piece of music. An evil hypnotist’s watch that puts the listener in a trance ‘White Walker’ swings with a lazy groove. The sequencing of this album is top notch and the tracks ebb and flow perfectly with the tempestuous time changes on ‘Halloween’ amplified by the laid-back vibe of its predecessor. As you’d expect a live version of ‘Crystal Lake’ sends the crowd into raptures before that Metallica cover. Originally appearing on Kerrang!’s Master Of Puppets tribute album ‘Orion’ is a faithful rendition to the point of facsimile and subsequently it’s the only song on this collection that falls short: it would have been cool if Mastodon had grabbed the bull by the horns and made ‘Orion’ their own.

A ferocious live run through of ‘Iron Tusk’ brings the album full circle and makes for a fitting conclusion. Far better than your average ‘Best Of’ compilation Medium Rarities contains plenty of deep cuts for the hardcore fan but it’s accessible enough to win new converts. 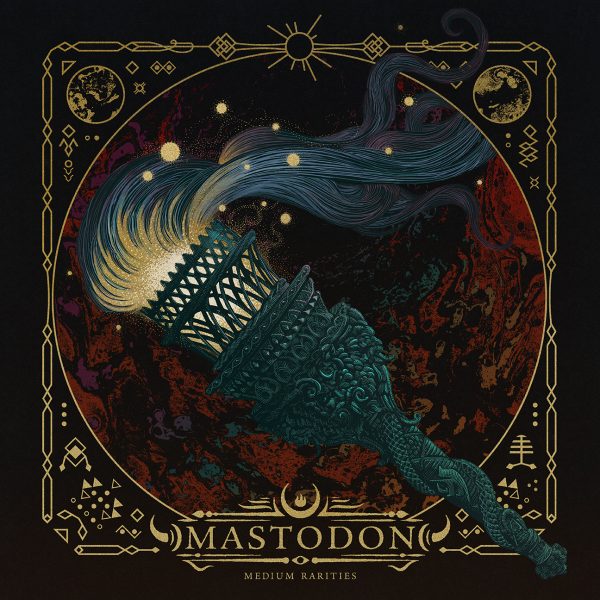