Ex-Megadeth guitarist Marty Friedman returns with ‘Tokyo Jukebox 3’ – his third (shockingly) collection of J-Pop covers given a decidedly metal-centric makeover, and his first since Vol.2 back in 2011. J-Pop, you ask? Basically it’s Japanese pop music, video game themes, pop culture stuff, y’know, cute. But fear not if you think this is going to be a twee-fest, for it doth rock. Mightily.

Friedman played with Mustaine for 10 years, from 1990’s classic ‘Rust In Peace’ to 99’s slightly less classic ‘Risk’, finally quitting the band in 2000, dissatisfied by the increasingly commercial direction the music was taking. He then, in 2003, decamped to Japan where he has remained to this day, immersing himself in the culture and becoming something of a regular on Japanese TV. He has appeared in over 700 shows and has also been appointed an ambassador of Japanese heritage by their government (more on this later).

The music itself is a joy. Full of the boundless, energised optimism of Japan and it’s culture, married to quite ridiculous levels of western metal complexity and power, it works much better than it has any right to and will be ideal for fans of Babymetal, or anyone into the never-ending capabilities of the electric guitar, which, let’s face it, is all of us.

Friedman wastes no time, from the opening moments of ‘Makenaide’ we’re off into full-on shreddage. The music Bill & Ted were always so desperate to create? Positive, epic, able to unite the world and chock full of widdly guitar? This is it.

‘Sebonzakura’ is immense – all the guitars are cranked up to 11, the song rampages forwards and then somehow manages to go up a gear before roaring to a thrillingly brutal climax. ‘Gurenge’ which, apparently, is the theme to Netfilx’s ‘Demon Slayer’, is humongous, borne aloft by quite ridiculously extraordinary guitar work – dual lead, mind-bending solos, distorted riffs, they’re all here. And then they get turned up and accelerated. The levels of energy and attack on display here are simply breathtaking.

You almost OD on the sheer scale of these performances. Everything is, to misquote Lemmy, bigger than everything else. Literally everything is HUGE. Even quiet, reflective moments (although there aren’t to many of those) are TO THE FUCKING MAX. The bass guitar sounds throughout as though it has been strung with steel cables, how do they get that sound? Riffs are uniformly big enough to plug black holes.

Midway through the album we come to ‘The Perfect World’, the only vocal track on the album, sung by Japanese pop star, Arufakyun. Rest assured, if she ever wants a parallel career in rock, it’s ready and waiting for her, she nails this track. And then we’re back to the firework display. There are more dirty riffs, which disappear, a la Wile E Coyote, off cliff edges before newer, shinier, bigger riffs appear, snapping into view on elasticated audio bungees. Seriously, these guitars could topple Godzilla.

The mammoth industrial riffage of ‘Ikuze Kaitou-Shoujo’ is genuinely fearsome. Intense doesn’t do it justice, one riff levels buildings in downtown Tokyo, clearing a path for a bigger riff to storm through the carnage and rubble dust. These precision riff-monsters, drenched as they are with OTT solos, almost always head off into an EPIC KEY CHANGE!! (there are lot’s of these).

We finish with the ‘Japan Heritage Official Theme Song’ – a track Friedman was commissioned to write to be played at government sponsored cultural events and for which he collaborated with the Tokyo Philharmonic Orchestra. And you thought that this album couldn’t get any BIGGER. Strings, crescendos and a final big finish and we’re done. Phew.

You may need a compulsory concussion test after listening to this album, subtle it ain’t. But then when is K-Pop ever subtle, subtle isn’t what this album is about. It’s about size, fun, showing off, technology, brash, dazzling neon-lit bombasticism…is that even a word? Who knows or cares, this album is a white knuckle ride. Remember that feeling when you were a kid. You were running. Running faster than you’d ever run before, too fast, faster than your legs could actually handle and you knew, just knew, that at any moment now you were going to lose control and fall, flying forward, doomed to crash painfully into whatever was just ahead of you. That’s what it feels like to listen to this album. Strap in and enjoy. 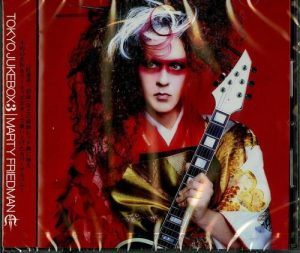