Birmingham-born Martin Barre returns with Away With Words, which features several newly composed pieces together with fresh interpretations of some of the less celebrated moments from the Jethro Tull back catalogue. The apparent split in the Tull ranks at this late stage in their career has bucked the trend of bands from the 60’s, 70’s and 80’s dissolving as their fortunes declined only to put their differences aside and reunite – something which has happened with increasing regularity throughout the twenty first century. What this means for Tull fans is that they can currently enjoy new music and tours by both Ian Anderson and Barre, this being his first solo release for more than a decade. 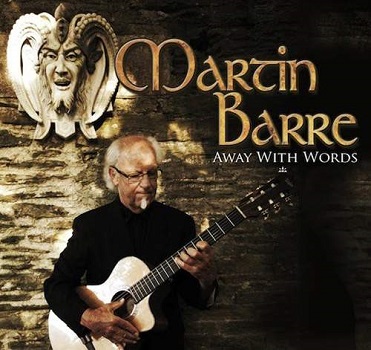 The Tull songs selected spans the era from 1976’s Too Old to Rock n Roll, Too Young to Die through 1984’s Under Wraps, arguably the band’s most maligned release for its uncharacteristic injection of drum programming and synths. Not that there is much in the way of electronics here with Barre primarily sticking to acoustic guitars alongside bouzouki, mandolin, flute and bass clarinet. The one moment where words are not entirely absent is ‘Paparazzi’ where vocals are supplied by Dan Crisp, Barre also moving into electric mode for a stirring ‘Fire at Midnight / From the Ashes’. Far more than just an album of exquisite guitar playing long time Tull aficionados’ will rejoice as Barre looks back to 1978’s Heavy Horses for ‘Moths’ and ‘One Brown Mouse’ and 1982’s Broadsword & The Beast for the delicate ‘Pussy Willow’. But Barre is not simply looking over his shoulder as the pieces are refreshed and reworked, breathing new life into old furniture with eminently satisfying results.

Martin Barre and his band A New Day appear at The Robin 2 on October 10th and Away With Words is released on September 28th via RSK’s Edifying Records.