Hailing from Petersfield, Hampshire Mark Vennis & Different Place are a roots rock combo who’re about to release their third album Fighting On All Fronts. Drawing inspiration from the likes of Johnny Cash and the Clash the guys have produced an album that inspires internal revolution.

The title track is also the album opener and it comes out with all fists flying. It’s a bright and breezy number that tempers it’s effervescent, upbeat nature with a gritty lyrical realism. The Pretenders, Billy Bragg and Hugh Cornwall all rolled into one ‘Fighting On All Fronts’ is a call to arms for the damned and downtrodden but here’s the rub: it’s all wrapped up in a delicious melody which makes Mark Vennis & Co such a tantalising proposition. Like a musical version of Larry David ‘Waste Away’ explores the frustrating minutiae of modern life and delivers it with a lyrical astuteness (“I saw a dirty old vicar/Eating burger and fries”) but there’s that ever-present focus on tune that carries things forward.

It seems that no musical style is out of bounds to Mark Vennis & Different Place as ‘Cut Me Lose’ saunters down the street with a lazy ska vibe while the whimsical ‘House On The Corner Of The Road’ is lit by a warm golden hue. Fighting On All Fronts is an album that ebbs and flows perfectly, it’s not all folky punky rage, as the gently cascading ‘Light Summer Rain’ precedes the politically charged ‘Messages From A Messed Up World’.  Heavy on the echo ‘More In Sorrow’ has a Jah Wobble dub vibe going on but, garnered with damning lyrics, it becomes a barbed bomb. ‘The Shark’ and the shimmering ‘Spinning Gold’ inject a slower pace that highlights the expansive nature of ‘The Edge Of Everything’.

It’s hard to draw easy comparisons with Mark Vennis & Different Place and other groups and the truth is that, why they sound familiar, they don’t sound like anyone else. However, I’d draw a definite parallel with the Clash, but more aesthetically than musically as there’s a whole world of music from which they paint their sound ‘Backwater’ bobs like a yacht on a calm ocean before things kick up a gear for the humorous ‘As The Crow Flies’. For the albums closer Mark Vennis & Different Place have saved up the good stuff and ‘Shadowboxing’ is akin to looking up at a nocturnal crystalline sky as guitars gently twinkle and shine.

That Mark Vennis’ music is so cinematic shouldn’t come as a surprise when you consider his day job is in film (he recently produced The Slits documentary ‘Here To Be Heard’) and he brings that vision to Fighting On All Fronts with each of the 13 tracks being a picture postcard. 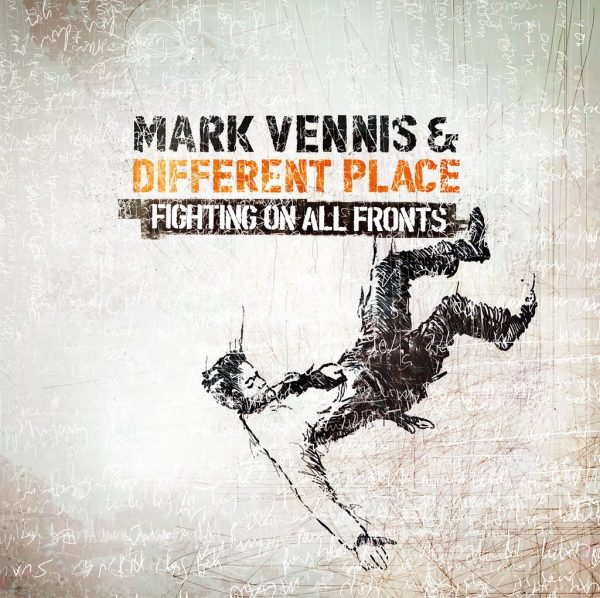