Maybe not reinventing the wheel, more polishing it up till it’s shining like new…

When the Vinnie Vincent Invasion got burned down by the label on the cusp of the nineties, the rock & metal band Slaughter rose from the ashes. Anyone remotely interested will know the band’s subsequent history, and it’s perhaps not surprising that Mark Slaughter has used this first solo opportunity (produced by Michael Wagener) to personalise his music.

His signature vocal timbre is present and correct, but… it’s less metallised, it’s not so shrill, and his music goes beyond the visceral simplicity of classic metal, adding complexity and melody and… it’s got soul. And an abundance of energy… opener ‘Away I Go’ scorches the page, a road trip metaphor, eventually erupting into a cacophony of call-and-response. That’s only the beginning of a revitalised pocket of activity, where Slaughter adds width and texture to a traditionally narrow frame of reference. It will astound and delight you. Maybe.

Most albums have a centrepoint. A pivotal track around which all other tracks revolve. Yet every track here seems to be circling every other track, each one in its own distinct orbit, each one within its own world.  That said, you could make an argument that the fabulous ‘Deep In Her Heart’ just edges ahead of the rest. It’s a 7 minute odyssey through popular music’s most interesting late twentieth century developments, from the Beatles and Pink Floyd to Spocks Beard and Savatage. Rock music spiked with psychedelia, powered by a gorgeous rush of pop optimism, spinning through the evocative sound of string quartets and an operatic, progmetal middle eight. An ultimately undefinable piece of music that is a delight to pick over. It’s the album in microcosm.

While present day rock music prevaricates over moving on or looking back, Slaughter does both. From ‘Baby Wants’,  blatantly and affectionately assembled from Alice Cooper spare parts and old Slaughter albums, to the imaginative production and brilliantly baroque stomp of ‘Miss Elanious’, this is an album that is equally a waltz down memory lane and a lesson on how to write great rock music. Luxuriate in the languid, fading pop grandeur of ‘Carry Me’, or reminisce with ‘Don’t Turn Away’, a nostalgic, big production duet with Gena Johnson (the studio engineer), full of slamming crescendos, emphatic beats and melodic axework.

From that point onwards, the rear view mirror is the album’s all-consuming force. ‘Never Give Up’ is an anthemic blast from an illustrious past, and ‘The Real Thing’ suspends us in eighties AOR aspic, revealing a memorably melodic hook, stamped on like a tattoo. There’s not a weak moment on Reflections In A Rear View Mirror. No, it doesn’t reinvent the wheel, but it polishes it up till it’s shining like new. 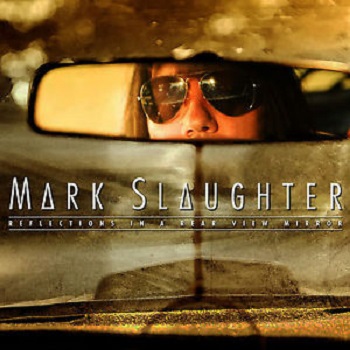