Having read The Telegraph’s somewhat disparaging review of Mark Knopfler’s show which took place earlier in the month at Glasgow SECC, I was interested in seeing if there was any validity to it, or just the ramblings of someone bemoaning the fact that it wasn’t 1983 and they weren’t at a Dire Straits concert.

Until this evening’s concert, I had not actually managed to see Mark Knopfler play outside of Dire Straits, and that makes it at least 20 years ago – and after the first couple of songs, I can only berate myself and wonder why I left it this long. 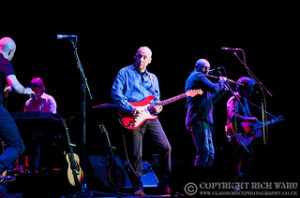 Opener ‘What It Is’, is a superb song and unmistakably Knopfler; he is one of just a handful of guitarists that has genuinely created his own style – something that is distinctive and instantly recognisable.

Promoting his new ‘Privateering’ album, ‘Corned Beef City’ is the first song to get an airing, it has a slight country tinge to it, not too dissimilar to Tom Petty or Travelling Wilburys. This is swiftly followed by the title track, a song which gradually builds in momentum from it’s acoustic start with Mike McGoldrick on uilleann pipes and John McCusker on fiddle enforcing its’ celtic feel. The set continues with choice pickings from across his career; more recent numbers such as ‘Hill Farmer Blues’ and ‘Marbletown’ sit comfortably amongst the older more familiar songs such as ‘Romeo & Juliet’. Knopfler was complemented perfectly with a group of top quality, experienced musicians. Long serving keyboard maestro Guy Fletcher will be familiar to most, but all members are given their moments. The upright bass/fiddle solo was a little too indulgent for my tastes, but a minor quibble in a set stretching just over two hours. Saxophonist Nigel Hitchcock even joined the band to embellish a couple of numbers.

The SECC review complained of a ‘Sonic Blancmange’. Well, I’m happy to report that the sound at the LG Arena was superb – well balanced and clear on the quieter and louder moments; such a far cry from days of old when the NEC was renowned for its’ shed like acoustics.

‘Telegraph Road’ is stunning and comes close to the live version committed to vinyl on ‘Alchemy’, and enough to send a shiver down the spine; that alone would have been worth the admission. The inclusion of ‘So Far Away’ and ‘Going Home (Local Hero)’ for the encore are the icing on the cake, and a perfect ending to a night that will be remembered for some time to come.