More barbed bile and venom than the bubonic plague…

In the corpsepaint smeared corridors that play home to Scandinavian black metal Marduk remain amongst the most revered residents. It’s not overstating things therefore to say that the release of Frontschwein – their eighth album – is the best possible New Year offering to present at the charred altar of all who fall at the feet of the merciless firebreather. Marduk made an immediate impression with their very first demo Fuck Me Jesus, released in 1991, and have been a constant skin piercing thorn in the sides of all that is pure and sacred ever since.

Over what is fast approaching a quarter of a century Marduk have proved an unforgiving savage source of unbridled aggression immersed in the dark arts, unseen and unheard by the mainstream. Although much of their early work was traditional black metal fodder taking its power from anything of a blasphemous nature, some of the biblical bashing has made way in recent years for some material fired up (literally) by military matters.

This trend continues on Frontschwein which is largely inspired by World War II although don’t expect any of its contents to appear as a tearjerking soundtrack to the next BBC footage of the blood red sea of ceramic poppies that circled the Tower of London last year. There’s nothing schmaltzy about Marduk. Their tales of battle are barbaric, hard to swallow, and do not come softened by sweeteners.

The only member of Marduk to have seen out the full 25 years is guitarist Morgan ‘Evil’ Steinmeyer Håkansson although bassist Magnus ‘Devo’ Andersson’s association with the band stretches back almost as far although he did take a 10-year sabbatical before rejoining in 2004. Drummer Fredrik Widigs is the only really new recruit having picked up the sticks in 2013 while Daniel ‘Mortuus’ Rostén (previously with Funeral Mist) replaced long time vocalist ‘Legion’ 10 years ago.

The album’s title track is a dynamic opener fueled by a screeching guitar line over which Mortuus snaps and snarls like a pup on its first day at canine obedience classes. Although the march into the abyss on tracks such as ‘The Blond Beast’ is of Third Reich precision Marduk forge an ambience that while blackened and brittle around the edges is still accessible enough for black metal followers. ‘Afrika’ is not an everyday song title for such seething ghoulhounds as Marduk, but the album’s third track proves to be another fiery cocktail from the furnace with Widigs pounding out the blastbeats leaving Evil and Devo to create a barrier of noise-filled narcissism.

In a subtle style change, ‘Wartheland’ is more of a droning deviant, slower, more aggressive with Mortuss bellowing out his commands like a general trying to be heard over the gunfire. One of the strongest tracks on the album, the pounding beat almost mirrors the falling of the bombs around the trenches painting a bleak desolate landscape from which survival appears unlikely. ‘Falaise: Cauldron Of Blood’ is a melting pot that threatens to bubble over with its angry riffs and frenzied pummeling of the skins closing in around you.

The longest song on Frontschwein is the colossal ‘Doomsday Elite’ which opens up in a disjointed fashion that makes it hard to see in which direction the track is heading. It eventually develops down a tortured and twisted path of Marduk madness with energy levels threatening to send your head spinning. Focus is possible on the grating ‘503’ although the crashing flurry of cymbals at one point starts to smash their way through a few brain cells, while Mortuus shouts incoherently over the melee.

Marduk draw the dark veil over this exemplary black metal release with the cacophonous ‘Thousand-Fold Death’ with Mortuus by now wound up tighter than a bank vault firing out his barbed bile with more venom than the bubonic plague. Some of the best rhythms on the whole album complete an inspired final number while the drumsticks are pushed almost beyond their natural limits by the wonderful Widigs. 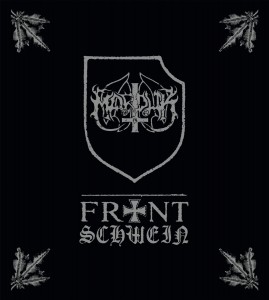