Housed in a sleeve that recalls Kiss’ Destroyer Manowar’s fifth album Fighting The World  was something of a mixed bag. Taking their core sound and refining it for mass consumption alienated many fans but in terms of ballsy heavy metal things don’t get much better than opening (and title) track ‘Fighting The World’. An anthem in its purest definition it’s a defiant track with a huge sing-along chorus that takes the bands dramatic, epic nature and wraps it up in a four minute song. It set the bar high which the following ‘Blow Your Speakers’ failed to reach and, like ‘80s Kiss, it’s a plodding song that doesn’t ignite. Lyrically too it falls short as a band who once sang about Faustian pacts and Valkyries flying to Asgard now name check MTV and their ilk.

However, there’s plenty to recommend Fighting The World and in many ways it’s an embryonic power metal album with ‘Carry On’, cheesy and slightly camp, foreshadowing DragonForce and Rhapsody of Fire. Likewise, the excellently titled ‘Violence And Bloodshed’ drops the loincloths and axes in favour of a submachine gun for a tale of urban warfare which works perfectly but, those who prefer the bands early, grittier aesthetic might find this a bridge too far. With a spoken word intro from Orson Welles, ‘Defender’ finds Manowar on more familiar ground for a truly grandiose song whilst ‘Holy War’ pins down the hammer for a frantic thrash fest. Regular listeners will be aware of Joey DeMaio’s bass skills and he lets fly on closer ‘Black Winds, Fire And Steel’.

Definitely an album of two halves Fighting The World found Manowar transitioning from indie to major label with a slight wobble. The first four tracks seem tailor made to tempt new fans whilst the remainder will definitely sate the old timers.

Released in November of ‘88 Kings Of Metal found Manowar on more familiar ground. The nitro injected intro that heralds the arrival of ‘Wheels Of Fire’ sets the song on a collision course and it races off leaving tracks of burning rubber. Eric Adams in particular seems on top form and ‘Wheels Of Fire’ is the perfect vehicle to display his vocal talents as he alternates between guttural growls and glass shattering shrieks and all this over a beat that tears along like a runaway locomotive. The title track carries over some of the groove from Fighting The World only it’s infinitely heavier and packs a serious punch. ‘Heart Of Steel’ is the obligatory power ballad but the lyrics attach extra weight which juxtaposes the following bass solo which is wrapped in a reworking of Rimsky-Korsakov’s ‘Sting Of The Bumblebee’.

Kings Of Metal is a vast improvement on its predecessor precisely because it distils the classic Manowar sound and that’s most evident on ‘The Crown And The Ring (The Lament Of The Kings)’. A theatrical piece that’s cloaked in classical music its lyrics speak of Vikings drinking mead on a misty morn…which is exactly what you want from a Manowar album. Similarly the totally politically incorrect ‘Pleasure Slave’ bludgeons the listener with a monolithic riff while the rebel rousing ‘Hail And Kill’ scorches the earth between your speakers. ‘The Warrior’s Prayer’ is a tale spoken in a soft Welsh brogue and is garnished with some cool sound effects and sets things up nicely for dramatic closer ‘Blood Of The Kings’.

After the slight commercial leanings of its predecessor Kings Of Metal is an album that set Manowar back on course and if anybody ever asked you to define the term ‘heavy metal’ I suggest you play them this album.

It took four long years for Manowar to follow up Kings Of Metal and in that period they lost long term guitarist Ross The Boss and drummer Scott Columbus. However, the shifting line up seems to have revitalised Manowar and, like grunge never happened, they unleashed a career defining, full-on metal masterpiece in the shape of The Triumph Of Steel. Opening with an ambitious interpretation of Homer’s Iliad, ‘Achilles, Agony And Ecstasy In Eight Parts’ is a track that’s as lofty as its lengthy (28 minutes!). Yet, despite its elongated running time, it never becomes staid and that’s because each part is a song in itself yet the whole piece flows seamlessly. From the operatic prelude to the eighth part (‘The Glory Of Achilles’) it’s a musical journey that takes in all shades of Manowar’s repertoire with new drummer Rhino turning in a stellar performance on the five minute solo ‘Armor Of The Gods’.

The vast, monumental nature of ‘Achilles, Agony And Ecstasy In Eight Parts’ means that anything which followed would be dwarfed by comparison. It’s a problem the band circumnavigated by doing what they do the best as the fist-in-the-air Manowar manifesto ‘Metal Warriors’ testifies. Full of blusterous bravado it makes a fine companion piece to the adrenaline charged ‘Ride The Dragon’. ‘Spirit Horse Of The Cherokee’ is a bit of a lyrical departure and, by extension, feels slightly disjointed from the rest of the album. The ululating ‘Burning’ sets things back on track as does the rapier like ‘The Power Of Thy Sword’. Sounding as you’d expect ‘The Demon’s Whip’ snaps and cracks while the ethereal ‘Master Of The Wind’ ends the album on just the right note while this edition adds, as a bonus cut, the epic ‘Herz Aus Stahl’.

The Triumph Of Steel found Manowar at the peak of their powers and they delivered a record that’s the ultimate presentation of their sound. Strangely, this album was their final for Atlantic yet they still continue to release top shelf records but if you’re looking for a mid-career highlight, this is it. 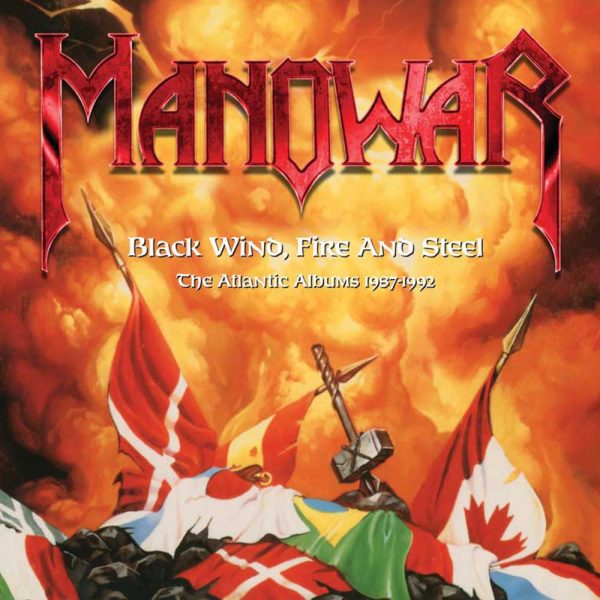 Disc One: Fighting The World

Disc Three: The Triumph Of Steel