Tonight’s support were The Coral, still back in the swing not long after coming back from a five year hiatus. Their opening song was an interesting mix of English Psych and electronica, and I would have hoped a band containing two guitarists, a keyboard player and two percussionists would have had a little more power, but the second percussionist was almost inaudible for most of the set, and with due allowance for the limited amount of stage space they had, they must have been one of the most immobile bands I’ve ever seen, with very little attempt to project themselves or engage the crowd. There was minimal chat between songs other than “Thanks” and “This song is called…” although in one instance, they appeared to announce that the next song was the new single but neglected to tell us the title, but it also has to be said that they crammed a lot of music, 12 songs no less, into their 40 minute set. It’s a pity to be critical, because there was plenty going on musically, whether a nod to American psych, including Love, and even to Hawkwind at one stage. They were interesting some of the time, but didn’t really leave much impression.

In recent years, at least when visiting this area, the Manics have preferred to play the more intimate confines of Wolverhampton Civic, but with that not a possibility this time around, and as this was part of an arena tour anyway, the Arena Birmingham it was. It  didn’t look like the full arena was being used, the stage was erected about halfway along the floor area, but when the show began, the first and strongest impression was that the band were taking advantage of the extra space by having the biggest lightshow I’ve ever seen them use. It stretched across the full width of the arena, incorporating three video screens, and it has to be said that during the whole show it was used with some imagination, with some thought behind the various effects, including the interesting twist of showing a lyric to introduce several songs, although not necessarily the obvious one. The other thing to be noticed early was that the touring band were now a six piece, with two extra guitar players, as well as a keyboard player tucked into the space behind where Richie would have been. 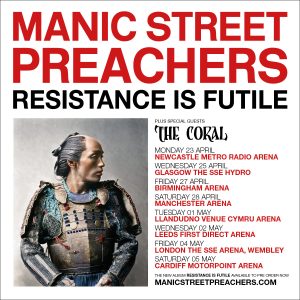 In keeping with the new venue, and altering the stage lineup, there was a distinct air of change around the setlist as well. The band opened with ‘International Blue’ from the new album, ‘Resistance Is Futile’, and there were several other new songs in the set, as well as some songs from the further reaches of the band’s career, replacing some songs you thought were fixtures in the set, no ‘Everything Must Go’ for instance. ‘Forever Delayed’, a 20 year old B-side came into the set, as did ‘There by The Grace of God’, and for ‘Dylan and Caitlin’, rather than use a backing track or film for the female vocal part, second guitarist Wayne Murray took the lead, which gave it a different twist, and the band also tried to keep the mood from getting stale by playing contrasting tracks in sequence. A furious ‘Masses Against the Classes’ was followed by the gentler ‘Horses Under Starlight’, with trumpet played by Gavin Hitchcock, and he kept the trumpet for the great ‘Kevin Carter’.

Most bands would set off the tinsel bombs at the end of the set, but in keeping with the ‘different’ concept the Manics set theirs off for ‘If You Tolerate This’ midway through the show, before the band exited leaving James Dean Bradfield alone for his usual acoustic interlude. Again a surprise, as he began with ‘Faster’ which you might have thought would never suit being played like this, but he turned into something resembling a mediaeval broadside with the verses made into a call and response with the crowd, one of the highlights of the show, leading to ‘From Despair To Where’, which he seasoned with some lines from ‘Total Eclipse of the Heart’

The band came back for a furious ‘You Love Us’ illustrated with some vintage footage of the band on the screens, and although some of the hits were obviously leading to the big finish, there was still surprises with ‘Slash And Burn’, Let Robeson Sing’ and the excellent new song ‘People Give In’ before what has become the traditional set closer ‘A Design For Life’. Perhaps it would have been something different if the band had broken the habit of the last couple of decades and done an encore, but it was not to be.

Although the band played well, and you can only applaud the attempt to shake things up and do something different with their live set, it sometimes felt that there was something missing in the atmosphere of the gig, and I can’t help but wonder if that was down to the venue. Apart from some pockets in the standing areas, most of the crowd were fairly quiet, and what atmosphere there was didn’t really reach back to the further reaches of the hall. A similar show in the Civic or Symphony Hall, for example, would have generated an electric atmosphere, although putting this stage and light show in smaller venues wouldn’t have left much room for the audience, but in an arena, the band’s more thoughtful and personal songs didn’t really grow and fill the space. They’re still a tremendous live band, but tonight wasn’t an all-time great.