Legendary and beloved Midlands melodic rockers Magnum return with a new album Escape From The Shadow Garden. Guitarist, producer and sole song writer in the Magnum machine Tony Clarkin is one of the most prolific songwriters out there. Shortly after the release of their last album On The Thirteenth Day (reviewed here) he was hard at work creating the follow up before heading into Mad Hat Studios in Wolverhampton.

The post-millennium Magnum albums have had one recurring element to them, a dark overtone in the music, and herein lays the most dramatic difference in this latest opus in comparison to its predecessors – that dark overtone is gone. Escape From The Shadow Garden has a far lighter ambience to it and although Clarkin always writes songs which will appease his fan base, those nods to the bands past is not always as obvious as they are with this lighter tone. Escape is very much modern Magnum but the nods to the past are far more visible which should leave long-standing fans with big smiles on their faces as many of these songs will transport you back in time. This is probably the most accessible and instantly enjoyable album Magnum has done in a long time. Since the band’s reformation, I’ve felt every album is better than the last almost as if Clarkin is purposefully (and successfully) one-upping himself. It’s great to see a strong songwriter still producing so much quality music so frequently and not resting on laurels or falling into a rut.

Song-wise, Clarkin has also assembled probably one of his most diverse collections of songs in both style and tempo. It could be said it’s ballad heavy, but every single one has a totally different flavour so it never feels like overkill. Some of the rockers have a strong commercial edge to them, like energetic rocker ‘Burning River’ and the addictive ‘Falling For The Big Plan’. Like I always do with Magnum albums, I listen out for the tracks that I know are going to kick some serious ass live and I’m already very excited about hearing ‘Live ‘Til You Die’ and ‘Crying In The Rain’ live and in the flesh.

Clarkin has always incorporated keyboards heavily in his songs but Mark Stanway’s Keyboards here are magnificently loud and pompous. Benefitting from the lighter tone, the keyboards create some of my favourite moments and hooks too. The lighter tone also highlights some wonderful melodic solos from Clarkin, some of his best ever in my opinion, and his monolithic riffs give the songs a powerful delivery. Vocalist Bob Catley has never sounded better and has created some truly unforgettable vocal melodies which transport you back to the band’s younger days with total ease.

Escape From The Shadow Garden is epic, grandiose melodic rock in a way in which only these guys can deliver. A superbly well crafted, written and performed collection of songs which sees the band continue to evolve whilst embracing the past. Long Live Magnum! 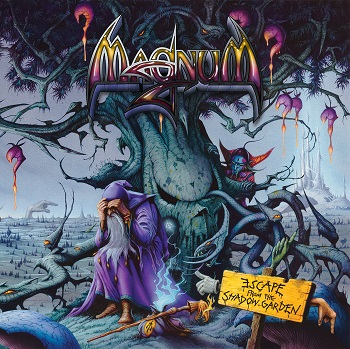