Hailing from Bergen, Norway, Magick Touch are a power trio formed in 2015 who draw a direct correlation with classic metal. However, their interpretation in no way sounds staid and, tackling the difficult third album with apparent ease, Heads Have Got To Rock ‘N’ Roll is a joyful ode to metal that sets its sights firmly on a bright future.

Existing somewhere between Motörhead and Budgie (although less raw than the former and not as proggy than the latter) Magick Touch hit the ground running with album opener ‘(This Isn’t) Your First Rodeo’. It’s a track that encapsulates all that’s great about traditional metal; from the ‘Damage Case’ style riff that heralds its arrival to the electrified guitar solo to the thunderous drums it’s a Scandinavian smorgasbord of rock delights that’ll have you reaching for your air guitar. Making good use of the Devil’s tritone ‘Watchman’s Requiem’ is an atmospheric stomper that finds the band firing on all cylinders to deliver an earworm of the highest order that’ll haunt you for days.

Using Saxon’s ‘Suzie Hold On’ as a starting point ‘To The Limit’ evolves into an all-out rocker with huge white spaces punctuated by a riff that falls like a guillotine blade and, with its huge anthemic chorus, it’s sure to transfer well to the live environment. The humongous ‘Love Is A Heart Disease’ follows and stomps all over the shop. Imagine Gene Simmons in full kabuki make up whilst spitting fake blood to ‘God Of Thunder’ and you’d have something approaching the monstrous nature of ‘Love Is A Heart Disease’. Heavy on the Boss HM-2 distortion pedal ‘Ready For The Quake’ does exactly what it says on the tin to deliver a nice slab of bluesy rock.

With more than a nod to Thin Lizzy ‘Bad Decisions’ is wrapped up is delicious harmonies and soaring guitars and the great thing about bands like Magick Touch is they don’t try to slip the odd ballad in and poison the water, but ‘Phantom Friend’ does ease up on the gas slightly to take a more measured approach. The snaking solo that erupts mid song is a thing of beauty and adds to the overall nocturnal feel. ‘Waiting For The Parasites’ follows for a no-holds-barred, full frontal attack before ‘Daggers Dance’ unleashes a cornucopia of cool that’s fleet of foot and leads into epic closer ‘Doomsday I’m In Love’. Radiating a furnace blast, it’s akin to standing at the gates of Hades and ensures the album ends on a rather ominous tone.

While it’s true that you can’t judge a book by its cover there’s something very reassuring about the very metal sleeve that houses Heads Have Got To Rock ‘N’ Roll. If it catches your eye and you expect a hearty dose of classic rock, you won’t be disappointed. 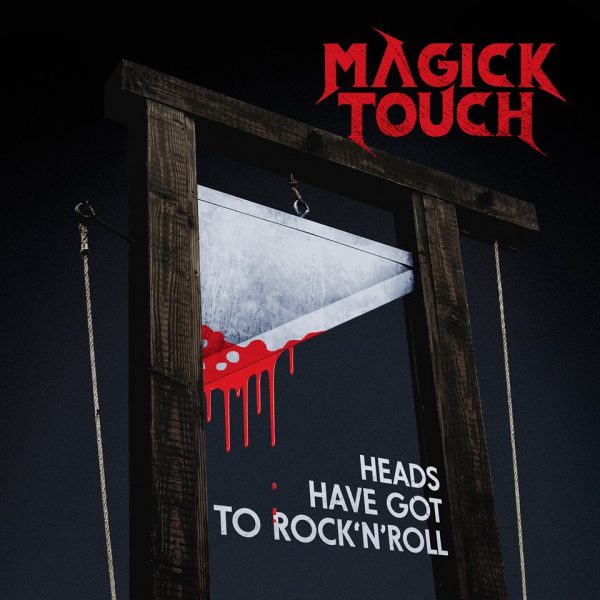