I suspect it’s part of growing older for most rock fans, when the bands you like start celebrating various anniversaries, although it does come home a bit more forcefully, when, for example Led Zeppelin mark their 50th Anniversary. On the other hand, it does seem surprising when a band like Magenta announce a 20th Anniversary show, maybe because the passage of time is often a shock in itself, or perhaps because they’re a band who tend to take their time, who aren’t exactly prolific, releasing a mere seven studio albums in that time, compared to, for example, their contemporaries Mostly Autumn, who have released nearly double that total in the same period. But twenty years of recording and performing is definitely an achievement worth marking, and so the band arranged a one-off show to celebrate, augmenting the band with a woodwind section, as with their ‘We Are Seven’ shows in 2018, as well as promising some special guests. There was also a film crew present, with the intention of releasing a DVD at some stage in the future.

The day’s proceedings began with a semi-acoustic set and short ‘Q & A ’session with VIP ticket holders, which gave some interesting snippets of news, including the possibility that the band’s next album would appear in early 2020, although I suspect the stress should be on the word ’possibility’. The show proper began shortly after 7.00pm, and it began on a high note with a superb montage of photographs from the band’s career, backed by the instrumental ‘Opus Three,’ before the core, 5-piece Magenta began the show with a quietly majestic ‘Gluttony’, after which the extra members began to arrive, beginning with the wind players Karla Powell and Katie Axelson and the band moved smoothly into a performance of a scaled down version of the double concept album, ‘Home’, opening with ‘This Life’.

At this point it was the band plus the wind section, with the music being augmented with some thoughtful back projections, specially filmed for this show. However, as the first set went on, extra elements came in, including more additional musicians. Peter Jones of Camel and Tiger Moth Tales came on to add another guitar, and also played a superb sax solo in ‘Hurt’, but the most fascinating extra member, musically and often visually, was percussionist Simon Bricklebank. At various times he added tubular bells, congas, xylophone and even a gong, which added a completely different dimension to the songs. At these points the band had become a 9-piece, but all the individual parts blended together seamlessly, without ever overwhelming the band or detracting from the music, A word, too for Christina Booth, who took on extra duties in the form of acting out parts of the music, but whose vocals were consistently excellent. By the time the band approached the end of the first half, it was obvious that they felt some of the pressures of playing the show had lifted, and ‘Journey’s End’ was almost a celebration, with guitarist Chris Fry, leaving the confines of the stage area to commune with the front row, and Christina and Rob Reed gurning at each other almost exuberantly. It was time for the interval and the band had earned their breather. 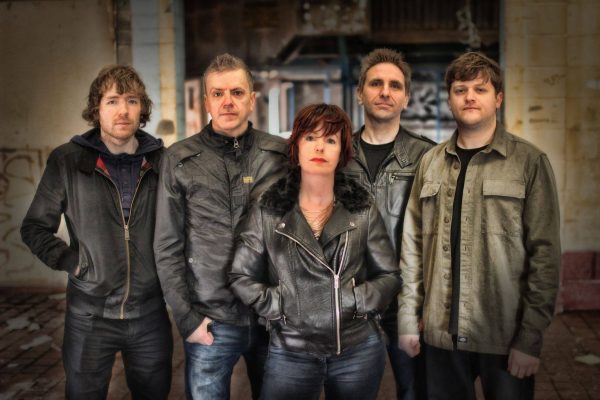 The second half included songs from of the band’s other albums, beginning with an excerpt from ‘Trojan’, before moving into an absolutely absorbing performance of ‘Pearl’, the song on the ’27 Club’ album devoted to Janis Joplin. Images of Janis on the back projection, combined with Christina’s stunning vocal made this arguably the highlight of the show. This was followed by the lengthy ‘The Ballad of Samual Layne’, which brought Peter Jones back on stage and which the band also augmented with two young actors donning military uniform to help illustrate the story of a soldier in the Great War, and included Christina Booth in her own little stage set for the ‘War Bride’s Prayer’ section.

It was good to hear ‘Red’ from the Glitterball album, which hasn’t been played much since the album came out, then it was time to end the main set with another epic, ‘The White Witch’, going back to the band’s debut album, The band gave this the full treatment, with the extras returning to play stylised characters from the Witch Trials, and Christina dressed in a robe as the title character, plus an actor playing the Witchfinder on the big screen It’s still a hugely popular song, and as hugely enjoyable a Prog Epic as you could wish for.

Naturally there were encores, firstly the band were joined by Peter Jones once more, plus Big Big Train singer David Longdon, to recreate the cover of Steve Hackett’s ‘Spectral Mornings, released as a charity single a few years ago, followed by an excellent ‘The Lizard King’ with the now customary prelude of Christina trying to teach the audience the handclapping part, which brought an end to a memorable evening, and an ideal way to mark the band’s anniversary.