With Christmas so close you could almost smell the turkey cooking in the oven, Machine Head rocked up for a suitably festive return to Birmingham. With tickets through the £30 barrier at an expensive time of year the show was not a sellout although the faithful were still out in force on a night best suited for polar bears and penguins.

Those punters there for doors opening were able to enjoy a short but feisty set from rising stars Heart of a Coward. This five-piece from Milton Keynes have been building up a good reputation on the back of their bombastic approach, not too far removed from early Killswitch. The hardcore crew slammed their way through half-a-dozen numbers including ‘Nightmare’ and set closer ‘Deadweight’ and clearly relished getting the chance to perform in front of a large crowd. HOAC are due to release their third album in 2015 and big things are expected.

Washington crew Darkest Hour were next up. They’ve been building up a loyal fanbase for well over 10 years but it’s fair to say that their popularity has never been as high as it is now.  Significantly, their latest album, their eighth, is self-titled, signalling a new dawn for Darkest Hour and their melodic metal attack went down well with the Academy crowd. While delivering some thrusting riffs the three axe wielders even managed to create their own mini human pyramid, without dropping a note. Class! ‘With A Thousand Words To Say But One’ completed a brief but committed set from the band with the pit being given a timely warm-up before the arrival of the main act. 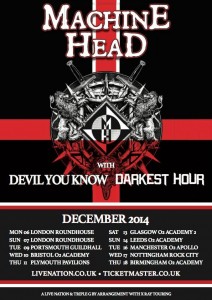 Machine Head’s previous UK visit had seen them perform at some more intimate venues where the crowds were in the 100s rather than the 1000s. Back in a big arena it was a little surprising to see one of metal’s genuine heavyweights failing to sell out a venue of this size, even allowing for its timing so close to Christmas.

Any negativity was quickly crushed by the siren call of ‘Imperium’ which the band seem to have now settled on as their regular intro and as set openers go this is heavy enough to uproot a tree. Not every punter in the room is as familiar yet with the newer recordings than some of the old crowdpleasers. There were still a few slugs fired from new album Bloodstone & Diamonds (reviewed here), the album opener ‘Now We Die’ being the first, a battlecry bubbling over with more explosives than a fireworks factory.  ‘Killers and Kings’ was another new one aired to approval at the Academy with its distinctive Machine Head hooks while the song title itself has an almost sing-along quality to the chorus.

With 2007 release The Blackening regularly topping metal album of the century polls, numbers such as ‘Now I Lay Thee Down’ are firmly ingrained fixtures at a Machine Head gig. Ten years on from the premature death of Dimebag Darrell, the song Rob Flynn penned in his honour, ‘Aesthetics of Hate’, sounded as vitriolic as ever as the divergent layers come together to complete one of Flynn’s finest ever pieces of songwriting. Perhaps the only number that comes close is the anthem ‘Davidian’ whose shotgun blast continues to burst eardrums 20 years after it first appeared on their debut release Burn My Eyes.

This was followed by another new one, the atmospheric ballad ‘Sail Into The Black’, although to be strictly accurate only around half of the eight-minutes could come under the ballad banner – the rest falling into more typically abrasive Machine Head territory. Flynn is not afraid to let the mask slip occasionally these days, even incongruously teasing the pit with a few lines of ‘Last Christmas’ at one point.

This tour also featured new bass player Jared MacEachern, who beat off around 400 candidates to fill the shoes vacated by Adam Duce. The best compliment we can pay him is to say that the absence of the longstanding member probably scarcely registered with the majority of the crowd. The all devouring ‘Halo’ is almost impossible to follow and so is usually left to the very end. A sweeping giant that crushes everything in its path. A little bit like Machine Head.