Maceo! One of those artists who is immediately known by just their first name. So good they’ve had a song (well, several actually) named after them. A name that’s synonymous with the genre of music they play. Well, I guess when that person helps to define the genre they play, that sort of thing is bound to happen.

So, for those Black Metal devotees who may not be au fait with the name, Maceo Parker is a sax player. He mostly plays soul and funk. He mostly helped create soul and funk, his sax runs through it’s history like an artery, like a particularly funky A-road. He hooked up with a certain James Brown in ’64 and became an integral part of the tightest band in show-biz. Then, having helped create funk, he took it to the next level in the 70’s by hopping aboard the Mothership with Parliament/Funkadelic and then, if that wasn’t enough, he joined the New Power Generation and tore up stages around the world with Prince. Quite a CV.

And now here we are with a new solo album, recorded for blues label Mascot’s new soul/funk imprint, The Funk Garage. This time around, Maceo is taking us to New Orleans, giving us a guided tour of that N’Orlans funk sound, so expect lashings of ‘second line’ rhythms and mucho guitar/keyboard interplay.

And to aid and abet him, Maceo has brought together a crack Crescent City band, composed of a wish-list of New Orleans A-listers and legends, including, amongst others, Ivan Neville and Tony Hall. The resulting gem of an album is a chilled mix of originals and career spanning covers.

‘Cross The Track’ kicks things off and, if you like it, the rest of the album pretty much follows suit. From it’s vintage JB intro it heads off into a classic New Orleans groove. The horns sitting nicely behind the beat. It funks gloriously and even has its own “to the bridge” moment. It’s all very Big Easy.

The songs are, for the most part, just excuses to hit that groove again and again. Don’t worry about track listings, just pop it on in the background and enjoy. ‘Maceo’ is what it says…the great mans name is spelt out on the beat and then we’re off. It just struts along in it’s own good time. ‘Compared To What’ has a bit of a smooth jazz feel, with oodles of jazz guitar and exceedingly groovy Hammond plus a snazzy, unexpected gear change. The musicianship is flawless and instinctive.

And the covers? Uniformly brilliant. This being a New Orleans themed album there are several acts who absolutely have to be in there. And to that end we have The Meters (with an eminently samplable killer drumbeat) and a faithful rendition of Dr. John’s ‘Right Place, Wrong Time’, lacking only an edge of sleaze that the good Doctor would have brought to the party.

Elsewhere we have Allen Toussaint, Aretha, Hugh Masekela and a loving tribute to Parker’s twin heroes – Ray Charles and his faithful sax player, David ‘Fathead’ Newman. And perhaps the best of the bunch is ‘Other Side Of The Pillow’ – a lesser known track from his old boss, Prince. It’s a sleepy, late-nite jazz thang which is, as the lyric says, “cooler than the other side of the pillow”.

Which kinda sums up what you get here. A great selection of tracks played by some of the best in the game. It’s laid back, these guys are in no hurry and there are no envelopes being pushed. Maceo is firmly within his comfort zone and that’s just fine, the guy has nothing to prove. So go on, throw on a velvet smoking jacket and enjoy – this isn’t going to change the world, it’s a 40-odd minute groove that blends into the background, but in a good way. Relax, you’re in expert hands. 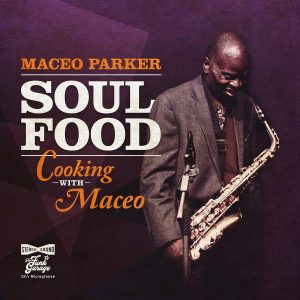