Arguably, it’s only when your roots run as deep and as wide as Lynyrd Skynyrd’s that you achieve the kind of longevity that sees you still running hard in 2018, 45 years, 15 studio albums and 6 Record labels after your 1973 debut.

For anyone who’s not been paying attention, Lynyrd Skynyrd is the band that defined Southern Rock as a rough’n’ready mix of classic elements taken from rock, country and blues, percolated through the wired up power of seventies Brit axemen, like Robin Trower and Paul Kossof. It was a sound quickly picked up and championed by the young working class adults of the USA’s southern states in the seventies. Rapidly spreading north thereafter.

Live In Atlantic City is a celebration of that rich heritage, and the band’s first release in eight years, featuring a trio of intriguing guest artists, 3 Doors Down, Bo Bice, and Hank Williams Jnr, all of whose own music reflects the same tone, texture and intensity of the headliners.

There’s so much history with Skynyrd that almost every song has meaning beyond its lyrics. You can feel it, taste it. Openers, ‘Workin For MCA’, ‘Gimme Me Back My Bullets’ and ‘Gimme 3 Steps’ are all from the first four albums through the seventies, when they were at their indisputable commercial peak, guitars cranked to the max, hearts on sleeve, spitting out statements of intent. So much so that the post 9/11, everyman patriotism of ‘Red, White And Blue’ seems right at home in that scorching opening salvo. The band appear to enjoy performing Bo (American Idol) Bice’s gutsy ‘Real Thing’ just as much as Bice. No surprise really, it’s probably the unpopiest song ever to achieve success on TV talent shows, and Bice’s “triumph of the human spirit” personal story is clearly one that appeals to Skynyrd’s socially aware aesthetic. Equally, the fire and rain of 3DD’s ‘Kryptonite’ and Hank Williams Jnr’s downhome ‘Down South Jukin’ places both artists firmly inside Skynyrd’s “good ole boys” mindset.

As you would expect, after a tribute to the much lamented (and covered) JJ Cale, ‘Call Me The Breeze’ they close the set with ‘Sweet Home Alabama’ and ‘Freebird’. No two songs have made a larger imprint on pop culture than these. Both are timeless. One comes with an undertow of complexity that reflects the politics of the time, and the other with an unsentimental yet moving expression of loss. Each strikes a chord even now.

No question, when this band were great, they were magnificent.

This 2006 gig was recorded at the Trump Taj Mahal Tower (but don’t tell anyone), and was just recently mixed and mastered. Not before time. It is being released on CD, DVD, Bluray, and inevitably, a 2 LP Gatefold+download. 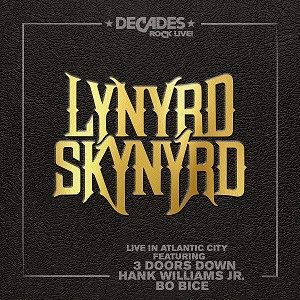