Since bursting out of Tokyo in 2016 Lovebites have gained a reputation as Japan’s premier all female metal band. The rest of the world haven’t been slow to catch on but if there’s any pockets of resistance left they seem set to be blown away with their latest EP Glory, Glory To The World.

A suitably grandiose opener ‘Glory To The World’ builds a palpable sense of tension through layered synths (the sort of introduction you’d expect to hear on a Helloween album) and creates a definite European feel; it entices the listener into another world before Lovebites arrive with all pistons firing to break the magic spell. The synths feature prominently throughout (especially pre-chorus) and they create walls of sound in which the song is framed. In Midori and Miyako Lovebites have a pair of guitarists who can rival metal’s best but they’re quite restrained until the three-and-a-half minute mark when Midori lets rip like Rust In Peace era Dave Mustaine which set things up for some fine finger tapping from Miyako before they solo in tandem with lines intertwining in that neo-classical way. Written in the midst of the global pandemic ‘Glory To The World’ is a song of hope, an uplifting number that spirals upwards towards some infinitesimal point.

Not content to rest of their laurels Glory, Glory To The World is the sound of a band evolving and moving forward and that’s primarily due to the new influences the band are incorporating. Midori wrote the music to the title track and it displays her love of gospel music and that is most evident in the choral nature of the chord progressions. However, long term fans needn’t worry as Lovebites haven’t severed their metal roots as the aptly titled ‘No Time To Hesitate’ proves. Blending various genres it contains elements of power, speed and traditional metal and finds drummer Haruna all over the kit with plenty of snare drum and a powerful beat that propels it towards a cataclysmic conclusion.

Evidencing vocalist Asami’s newfound love of thrash ‘Paranoia’ is a sandblasted slab of metal that recalls that classic Bay Area crunch (think Death Angel or Exodus). With guitar solos that go off the Richter Scale it’s all very air guitar inducing and is sure to cause havoc wherever it is played live. Based upon Beethoven’s Piano Sonata No 8 ‘Dystopia Symphony’ is, like the great composers masterpiece, a song of many movements. With an almost progressive rock sensibility it shape shifts and through many suites it takes on new forms, chameleon-like. A labyrinthian affair it leads the listener through a musical maze and I’m sure if classic Marillion had played power metal it would have sounded a lot like this.

Introduced by an ear-piercing, banshee scream ‘Winds Of Transylvania’ is another thrasher on a disc that rarely pauses for breath. There’s something very cinematic about Lovebites sound so it’s no surprise that this track was chosen as the theme tune to Japanese anime Vlad Love. Ensuring the band depart as they arrived ‘Winds Of Transylvania’ is full of squealing guitars that constantly dive bomb and the whole song swirls around the listener as if a flock of vampire bats.

Since releasing their debut extended play in 2017 Lovebites have gone on to release three studio albums, two double live sets, a four track single and this, their third EP (phew!). Glory, Glory To The World moves their sound forward and, it’s a nice problem to have but you’ll wonder how they’ll top this effort. 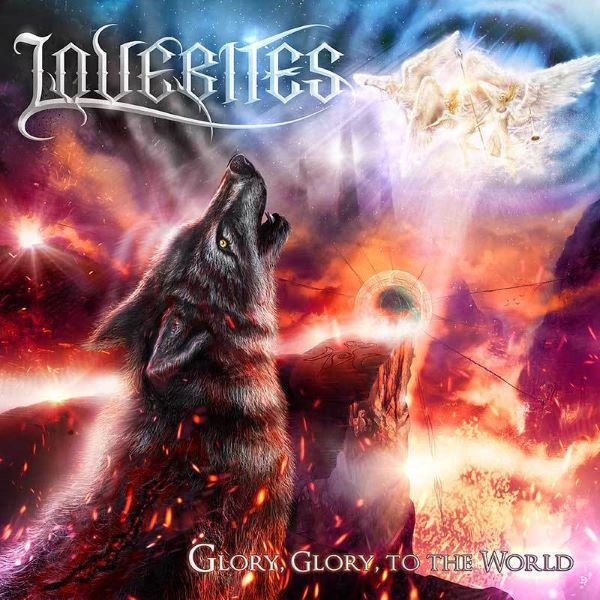