Tokyo’s LOVEBITES must be heavy metal’s hardest working band. Since their inception in 2016 they’ve released three albums, two EP’s and a four track single and, with no signs of slowing down, they’ve just unleashed their second video album Five Of A Kind-Live In Tokyo 2020.

An air expectation hangs heavy as a capacity crowd cram Tokyo’s famous Zepp DiverCity venue and a suitably long intro only adds to the anticipation. Like an overcast, leaden sky there’s a palpable tension that’s finally broken by a lightning strike as the band arrive and launch into ‘Thunder Vengeance’. All dressed in white and appearing like avenging angels it immediately finds the band in fine fettle and firing on all cylinders. As calling cards go it’s pretty damn perfect and an equally impressive light show illuminates LOVEBITES from all angles. Barely pausing for breath ‘Holy War’ follows hot on its heels with the breakdown mid-song being markedly different from that which appears on Electric Pentagram and it’s such deviations which make live albums so special.

“We are LOVEBITES and we play heavy metal!” screams Asami by way of introduction to ‘Don’t Bite The Dust’ as she preens and pirouettes centre stage like a gracious swan. Bassist Miho has more than a touch of Steve Harris and attacks the four strings with great gusto and it’s not until we reach fourth track ‘Rising’ and its piano interlude that we’re granted a breather of sorts. It’s an all out foot-on-the-monitor, horns-held-high live assault with the aptly titled ‘Raise Some Hell’ causing a typically reserved Japanese crowd to go a little nuts. Providing a moment of calm Miyako, attesting to her classical schooling, sits at the piano to deliver Chopin’s ‘Etude Op.10, No.12’ which segues into the heavy and ethereal ‘Swan Song’ as Miyako returns to the piano to bookend the song in tinkling keys.

Tipton and Downing, Gorham and Robertson, Murray and Smith, metal is full of great guitar combos and you can now add LOVEBITES’ Midori and Miyako to that illustrious list. Throughout the 100-minute show their interplay is exceptional but no more so than on ‘Addicted’ where they weave intricate webs. The ‘80s vibe of ‘Dancing With The Devil’ is seemingly made on the Sunset Strip and briefly diverts the show in a more sultry direction.

‘M.D.O.’ could quite easily swing with Slayer before an avalanche of ticker tape heralds the arrival of ‘Golden Destination’ and its triple time gallop. It’s a song that recalls Iron Maiden in their prime and races from speaker to speaker like the Charge of the Light Brigade.

Sometimes live videos can be epilepsy inducing when overzealous producers cut from camera to camera in double quick time. Matching the rapidity of their music Live In Tokyo is fast paced yet there’s a rhythm to the editing that holds your interest, even in our world with multiple distractions. ‘The Awakening’ riles up the crowd and sets the stage nicely for the all-out thrasher that is ‘The Hammer Of Wrath’. Asami and a piano introduce ‘Edge Of The World’ and holds the crowd spellbound, so much so that you can almost hear a pin drop which makes the coming storm even more volatile. ‘We The United’, interlaced with classical guitar lines, is the suitably epic closer and brings down the curtain to rapturous applause.

Recorded on 21st February Five Of A Kind-Live In Tokyo 2020 finds LOVEBITES in their natural environment and it’s a document that sits easily alongside Maiden’s Live After Death and AC/DC’s Live At Donnington. 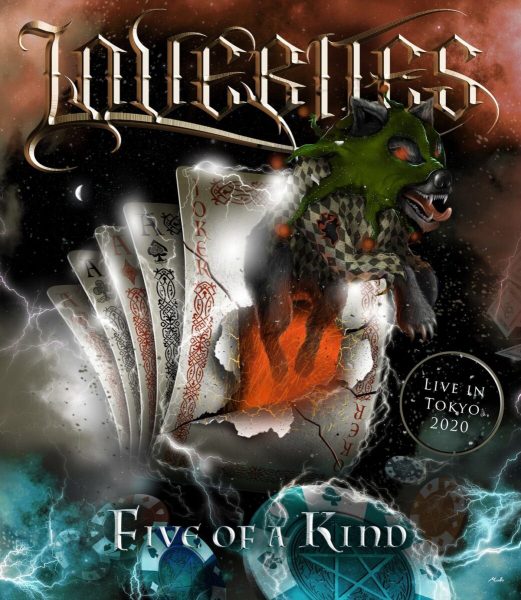