There must be some kind of geophysical link or spiritual connection between the badlands of the desert scene and the glacial mountain ranges and rugged lowlands of the Nordic nations, as they have both birthed some classic stoner grooves. Perhaps it’s the melancholic bent to the people who have to endure in these areas. Maybe it’s the oppressiveness of the weather, be it the mirage inducing heat or the long, long winters… a link between dust and ice. Or maybe it’s just the drugs. Whatever the cause, Lonely Kamel’s fourth album, Shit City, is a stormer!

The Oslo four-piece locked themselves away in an isolated studio, plugged in, cranked up the Orange amps and produced this bluesy, fuzzed up, bruising psychedelic stoner/doom smorgasbord. It’s dirty, hairy and more than a little fucked up. You can feel badly stoned just listening to this. It’s an ugly high but make no mistake, it’s fun!

The semi-Motorhead punky clatter of the title track gets us started, gritty, fast and raw. ‘White Lines’, however, introduces us to the beefier sound and dazzling duel guitar work that stay with us for the rest of the disc. Thomas Brenna and Lukas Paulsen are quite a team – be it down-tuned harmonies, Allman-slide geetar duels or twin attack monolithic sludge riffs, stripped down to their basics and then repeated ad nauseum – they are in perfect communion.

This is a blues album really. From the grungy delta riffs and harmonica of ‘Is It Over’ and the AC/DC-meets-Elmore James boogie mash up of ‘BFD’ (that’s Big Fat Dolly to you), to the overall mood of the album – oppressive, brooding, paranoid, fried. It bears down on you, there are “muddy waters of pain” and “rain falling down…like concrete”. Life is being examined through a drug haze.

However, there is hope. Love pulls the protagonist of ‘Falling Down’ out of his drug hell. There is wry humour, groove and moments of mellow(er) beauty, call and response guitars dovetailing blissfully into harmonic riffs. The joyous boogie jam of ‘Nightjar’ stops dead – a doom riff taking over, only to stop as suddenly as it began for the boogie to take over again, obviously the jam was too much fun to put down!

70s rock is also clearly a touchstone, although this is the honest flip side of that decades nostalgia. Theirs is not the summery, rose-tinted retro rock so in vogue at the moment. This is an album of darker, foggier hues. More how the 70’s actually felt. Take it from someone who was there, this is how the 70’s actually were. Yes, there were long hot summers and Jaws ‘n Star Wars but there were also nylon and polyester. There were seemingly endless strikes, flares, huge collars and kipper ties. There was bad hair, canes and meter rules in schools and teachers who couldn’t wait to use them and there was falling off your Chopper on concrete covered playgrounds… Shit City indeed! The Kamel understand this state of mind and soundtrack it perfectly. 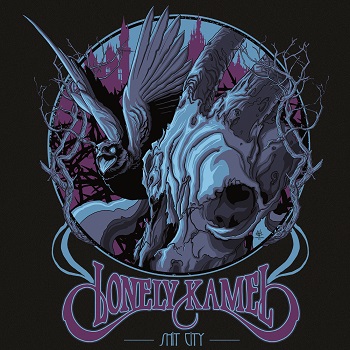