As introductions to two extreme metal entities go, this split release on Godz ov War
Productions, featuring Loathefinder and Druj works very well.
Polish outfit Loathefinder serve up the first three tracks all of which put you through
the musical wringer. You’ll need a strong nerve to face this onslaught that is likely to
push your musical endurance levels to the limit.
‘Soil Of The Starving’ has a searing opening hit that stops you in your tracks from the
first primeval screech and then continues to contort on its journey through a
labyrinthine passage of distorted shapes and sounds. ‘XXIX’ may be slower but maintains the same intense level, if anything amplified here as the moodswings are given time to gather momentum.
‘The Ugliest Crown’ completes a twisted triumvirate from Loathefinder in compelling fashion and the three tracks here – while not for the feint-hearted – are the musical equivalent of
peering perilously over the precipice and into the abyss.
Anyone expecting Anchorage angst merchants Druj to lighten the load quickly discover that won’t be happening on their first piece, ‘The Insatiable Fever’. More doom inclined than Loathefinder, Druj deliver a suspense-filled soundtrack that engulfs your senses like the Apache indians circling the beleaguered wagons.
As with their second song, ‘Divulge’ there’s little light relief although within the shadows a few nuanced touches can be detected if you keep both ears open. Split releases are not always everyone’s cup of tea but when the two forces align as successfully as Loathefinder and Druj have done here then there’s plenty of rewards to be had.
Tracklist
Loathefinder 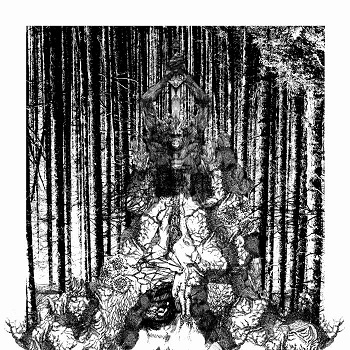