Wacken 2013, the festival’s 24th year, saw 120 bands playing for 75,000 sun-sizzled and far-from-sober metalheads from the darkest corners of the globe. And only eight months after the release of the 2012 DVD (reviewed here), 2013’s festival is to be released as a 3-DVD-set – also as a 3-Bluray-set and a 2CD pack featuring 32 highlights – with performances by 43 bands totalling 106 songs. 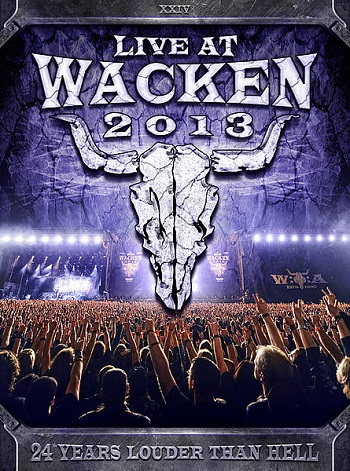 Like its predecessor, this collection boasts a host of top quality bands giving top quality performances that makes all of us lazy bastardos that couldn’t be bothered to get out of bed / town / city / country (delete as appropriate) and make our merry way to a sun-bleached field in Germany seethe with envy at those that could and did. But in the era of LED, LCD, HD, 3D, Flat Screen, Smart, Curved, vaster-than-your-eyes-can-comprehend Televisual devices and shiny disc-spinning apparatus that capture, contain, and cast long-distant memories of days gone by before our very eyes, we are saved! All you need do is book 3 days off work, invite your friends around, drag your TV and DVD player out into the garden, pitch a tent at the other end, decide which of the bushes / flowerbeds is for pissing the volumes of warm lager you and your friends shall be guzzling into and which is for vomiting into, insert the first of three discs, crank the volume on the super-holy-shit-it’s-like-we’re-there-surround system, press play, and then proceed to destroy your ersatz festival field.

And while you’re involved in a bout of manic moshing or some noisy, out-of-tune-but-it-doesn’t-matter-because-we’re-pissed-and-loving-it horns-aloft singalong, you could get the hose out from the garage, clamp it part way up a tree or dangle it from the roof, and switch it on at full blast. After all, what’s a festival without rain? And then, with Desparadoz’ performance signalling the end of disc three, your festival is at a close. But though the grass may be destroyed and there are more broken plastic pint pots and decimated junk food containers than you originally bought trodden into the muddy mass, you are elated. Why? You’ve just been to Wacken 2013 – one year after it happened. The neighbours will just have to live with the crappy garden next door that lets the whole neighbourhood down, won’t they?

And as if that isn’t enough, the good people at Wacken and UDR have hidden a couple of gifties in some of them. There’s one Golden Ticket for a “Lifetime Membership for the W:O:A” that will bestow upon the lucky discoverer the opportunity to enjoy the festival every year till eternity without buying a ticket. So while you’re off to Germany for metal and beer, the garden gets a rest and the neighbours can sigh with relief and return to their mundane existence unperturbed by the prospect of the nutter next door performing satanic rituals for three days once a year. Also somewhere out there within ten of the release are Silver VIP Tickets that include a tour through the Artist Village. “Ooh!” I hear you say. I know. Amazing! And to top it off, all the bands and labels have donated their royalties to the Wacken Foundation, a non-profit organisation in support of the Hard Rock and Heavy Metal scene. UDR Records will also be making a donation of 1 Euro for each and every DVD and CD sold, with everyone involved, from manufacturing to marketing, supporting the Foundation. You get your own private festival, metal musicians and the metal scene gets the support it deserves, and the neighbours… well, who cares? Yep, everyone’s a winner.

Bands on Disc One: