It shall forever remain a mystery why New Orleans’ Lillian Axe never hit the big time, but I guess when metal was at its commercial peak in the late ‘80s it was easy to get lost in the shuffle. With a hard yet melodic sound they had all the right attributes but sometimes the finger of fate can be fickle and as if to remind us of our folly Psalms For Eternity is a career overview that reassembles some of the band’s best songs and presents them thematically over three discs. Creating an alternate album for these altered times Psalms For Eternity is sure to stand the test of time.

With a circular motif there’s probably no better introduction to the delights of Lillian Axe than ‘Death Comes Tomorrow’. Spiralling upwards towards some infinitesimal point it’s a strong opener that perfectly encapsulates the band’s modus operandi as a dense riff is punctuated by huge white spaces and a pounding rhythm section that’s tempered by ethereal keys. It’s a song of epic, grandiose proportions, that reminds me of Led Zeppelin at their most sweeping and it’s one which could rival the lengthier songs on Physical Graffiti. The bombastic nature of ‘Jesus Wept’ packs a serious punch and with a succession of descending chords it drags the listener down to delirious depths. This first disc complies a set of songs that are heavy yet lithe and coax your feet into an impossible dance and, regardless of genre, songs don’t come much better than ‘Death Valley Daze’. Welcome to the world of Lillian Axe.

This collection is weighed towards the bands post-reformation output but earlier in their career Lillian Axe were often lumped in with the whole hair metal movement and on first glance it’s easy to see why. With their fine follicles and good looks, they certainly fit into the glam aesthetic while having Ratt guitarist Robbin Crosby produce their debut album only pigeonholed them further. Tracks from their early album included here, such as ‘All’s Fair In Love And War’ (from their ‘89 sophomore album) and ‘Waiting In The Dark’ (from the 1988 eponymous debut) do have a touch of vapidity about them and, while certainly not bad tracks, they’re eclipsed by the power of the later works. Listen to cuts such as ‘The Great Divide’ and you’ll find a lyrical depth to which many of their peers aspired by few attained while the epic ‘Under The Same Moon’ is the complete antithesis to vapid glitter metal and ‘Stop The Hate’ completes their metamorphosis.

Showing another facet to Lillian Axe’s sound is this third disc, aptly titled Sea. Consisting of power ballads, this set of songs are more measured and thoughtful and finds the band spreading their musical wings. However, the focus on slower songs means that this disc doesn’t sparkle and fizz like Earth and Sky yet it still possesses plenty of panache and finds Lillian Axe forging new ground. Take the epic ‘Fields Of Yesterday’ for example, a progressive number that’s almost Floydian in scope. A song of several suites it’s a soundscape designed to transport you to another dimension and its classical structure evidences how the band have evolved over the years. More acoustic based that the other two discs Sea sparkles and, with a forward facing, progressive bent, brings a sense of closure.

Psalms For Eternity is the perfect summation of Lillian Axe’s illustrious career and is an essential purchase for both the long-term and new fan. The sequencing of these songs presents them in a new context and while you won’t find them acting in new and strange ways they make for an intriguing listen. 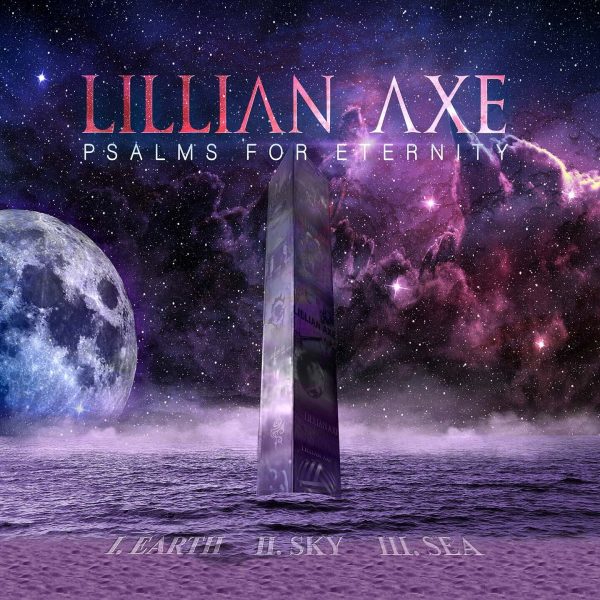