Although they came to prominence at a time when glam metal was riding high, Lillian Axe peddled a thoughtful brand of hard rock which set them apart from their peers. A strong focus on musicianship, and an adroit lyricism, means they still sound contemporary after almost four decades. Latest album. From Womb To Tomb, finds this Louisiana quintet marching forever forwards, and in doing so have produced a career-defining album.

Revolving around original members Steve Blaze (guitar) and bassist Michael “Maxx” Darby, Lillian Axe still have a vitality, and it only increases with age, and if you need proof then check out ‘Breathe’. It gets the album off to a swirling start with guitars spiralling upwards and thundering drums that are thrown like lightning bolts from the heavens. It makes the perfect preamble to opener proper ‘I Am Beyond’, and it’s here where the album really kicks into gear with a chugging riff and the band throwing their considerable weight around like a bare-knuckle boxer. In a move that’ll echo throughout From Womb To Tomb, ‘I Am Beyond’ is full of sublime harmonies the counterpoint and intertwine, and it’s the musical equivalent of one hundred searchlights illuminating a nocturnal sky.

At once fresh and familiar, From Womb To Tomb honours Lillian Axe’s past, and is powered forth by their trademark twin guitar tussle, yet it simultaneously sets one eye firmly on the future, and this undoubtedly the band’s most mature effort. In vocalist Brent Graham, Lillian Axe have a strong frontman, and it seems that Steve Blaze has finally found his perfect foil. Along with Sam Poitevent, Steve weaves intricate guitar lines yet, no matter how complex things get, Brent floats majestically atop, as if an eagle floating on a breeze. It’s those almost classical guitar lines which give From Womb To Tomb a grandiose feel, and you get the feeling that songs such as ‘Never Ending Me’ would lend themselves very well to being reworked by a philharmonic orchestra.

The first of several interludes which pepper the album, ‘A’ is a short, discombobulating soundscape that makes the following ‘The Golden Dragon’ sound even more bombastic. Like much of this record, it’s a mirror held aloft to highlight and contrast, and while From Tomb To Womb is not a concept album per se, the themes that echo throughout, and the lyrics, stitched by a common thread, make for a unified listen, and best consumed in one sitting. That’s not to say this is a generic listen, far from it, and each song inhabits its own space with ‘No Problem’ being a haunting centrepiece and ‘Dance Of The Maggots’, a song of biblical proportions, a monolithic Tower Of Babel structure that renders you dwarfed in its shadow. Belying its monochrome cover, From Womb To Tomb is an album of many shades, and the only thing missing is a high-octane, all-out-rocker, but aside from that, it has all bases covered.

Global Rock Records have quickly become the doyen of all that’s good and heavy, and the latest release from Lillian Axe will only cement their reputation. From Womb To Tomb is the sound of a band not content to rest on their laurels and have produced an album not of an age…but for all time. 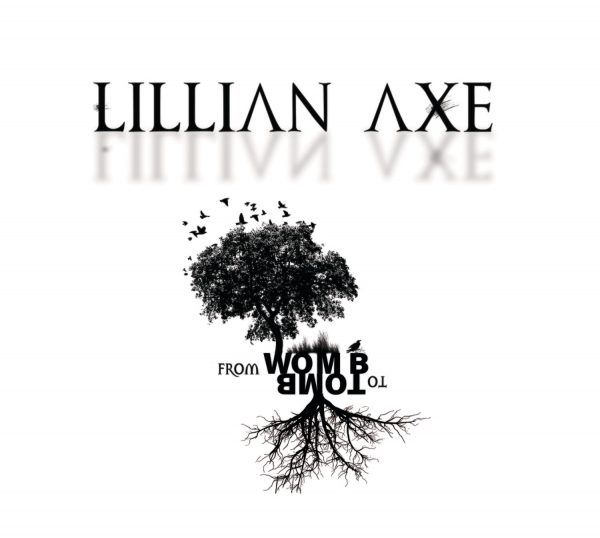