Remastered and reissued by Rock Candy Records and reviewed by Brian McGowan.

The late seventies: Legs Diamond‘s peer group included bands like Moxy, Quiet Riot and Angel, and they all competed for FM radio airtime. LD deviated from the developing conventions of melodic rock culture by consistently dangling one foot in progrock waters, and thus were impossible to pigeonhole. So far, so already well documented.

The forensics of this classy debut show up trace elements of bands as varied as Uriah Heep, Led Zeppelin and Sweet, as it alternately meanders satisfyingly and thunders energetically through the hard rock territory of ‘Stage Fright’, the music theatre of ‘Satin Peacock’ (Kiss wanted this one, but the band said no) and the sleekly ambitious ‘Rock’n’Roll Man’ – an epic, six minute piece that crystallises the essence of the band. And it’s all stitched together by a strong thread of songwriting sophistication.

The album made it into Kerrang’s “100 Greatest Heavy Metal Album Of All Time”, and has been remastered and reissued by the extraordinarily prolific UK label, Rock Candy, adding a second CD containing not 10, not 11 but 12 bonus tracks. It’s truly an aficionado’s dream, a treasure trove of tantalising outtakes, early versions of songs that made it eventually onto the debut; demos and alternative versions – there’s a rendition of ‘Rat Race’ from a 1976 K-West Radio compilation – a genuine, bona fide obscurity.

Arguably, it’s as much of an historical document in the journey of Legs Diamond, as it is a reissue of a 40 year old rock album. Rock Candy have surpassed themselves here. 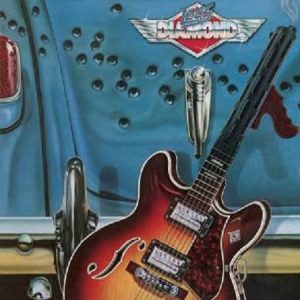