Good stuff huh? Proper, old school, BB King style blues with, if you’ve watched the video, a certain Mr. Bonamassa adding his chops. And that’s what this is folks, a Bonamassa-produced album, designed to get his buddy Larry McCray firmly positioned in the public’s eye, and boy does it work.

McCray is one of the last great blues hollerers left. Eight albums in and still going strong, having battled adversity (all of which is detailed in an upcoming biography of the man), he’s still standing, and proudly offering us his best album yet.

As ever, Bonamassa shares his production duties with Josh Smith and, as ever, they do a fantastic job, capturing the live sound of a big(ish) band with warmth and power. The album starts with ‘Arkansas’ (see above). It’s a belter, Horns, vocals and stinging solo’s wrapped around a Bo Diddley beat.

The soulful and laid-back ‘Good Die Young’ brings the Kings (Freddie and BB) to mind with a relaxed confidence while ‘Breaking News’ is more funky and contemporary, tackling, as it does, social injustice, inequality and Covid. Sax comes to the fore, adding a 70’s Crusaders stylee vibe.

Several of the songs are autobiographical, the aforementioned lead track for one, plus ‘Blues Without You (For Paul)’. I’ve no idea who Paul is, but nevertheless it’s a heartfelt and emotionally affecting track, topped with an aching solo.

There are guest stars too! Naturally Mr. B sits in on several tracks, most notably on ‘Mr.Easy’, which also features a keyboard solo from the ever brilliant Reese Wynans. Joanna Connor kicks up the pace on the fiery ‘Drinkin’ Liquor and Chasin’ Women’ while Warren Haynes adds some creamy Allman licks to the low key ‘Down To The Bottom’.

The album ends, as it should, with just McCray and his acoustic guitar on the autobiographical ‘I Play The Blues’, which does exactly what it says on the tin, and does it flawlessly. This is a fine album and will hopefully give McCray the exposure and recognition he so richly deserves. Brilliantly written, performed and produced, it deserves a spot in anyone’s blues collection. 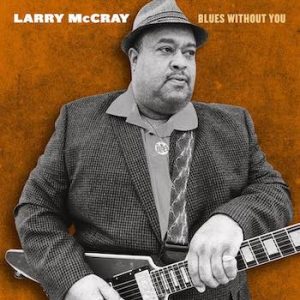