Three diverse artists finding harmony in the folk tradition are Langan, Frost & Wane. On paper they seem an unholy trinity; Brian Langan is perhaps best known for the rough hewn garage rock of Needlepoints while RJ Gilligan (Frost) rips things up with the punky Dark Web. Factor in reverb terrorist Nam Wayne (Wane) and the resulting sound is nothing like you’d expect. Drawing inspiration from the golden age of folk Langan, Frost & Wane is an album that unifies three disparate characters to deliver a cohesive sound.

Although they hail from the States there something quintessentially English about the sound contained herein. It’s at once autumnal and whimsical and captures the essence of the late 60’s psych tinged folk scene. In fact my first though on hearing opener ‘Perhaps The Sorcerer’ was the Fairport Convention’s Leige & Leif; with cascading guitars and close vocal harmonies it inhabits a similar sonic space. Swirling around the listener as if cherry blossom in a storm, frisky yet forlorn it has a duality that seems to exists in two dimensions and that’s just one of the many juxtapositions that makes Langan, Frost & Wane such an intriguing listen. Like Donovan’s output for Hickory Records ‘The Dandelion’ takes a more sombre route with a dark lyricism that’s unexpectedly arresting.

To label this trio as mere revivalists would be rather unfair and they’ve certainly imparted their own personalities on proceedings, case in point being the earthy ‘Falcon Ridge’. A tale straight from the Appalachian Trail it soars amidst brown and green hues and creates an ethereal, other-worldly vibe. There’s plenty of variety on offer as evidenced by the hypnotic ‘King Laughter’ that weaves its dark spell with Asiatic flourishes and some sublime sounds from the flautist while ‘Everyday Phoenix’ takes a different path with an early Dylan feel. Most of the tracks here inhabit a strange kind of world; it’s that intangible moment between wake and sleep, as with the bejewelled and opulent ‘Libra Moon’ which fractures light in many directions.

‘Alchemist Of Hazy Row’ turns base folk into pure gold and garnishes it with layers of goodness that bubble to surface and reveal themselves like petals of a lotus flower. Langan, Frost & Wane is the kind of embryonic psychedelic folk that would go on to influence the Small Faces (Ogden’s Nut Gone Flake) and The Zombies (Odessey and Oracle) and the fact that it was recorded in 2021, yet sounds so authentic, is a thing to marvel. Both ‘Orange Magic’ and ‘Everywing’ could have come from The Wicker Man soundtrack while ‘She Walks Alone’ in particular features some sublime Lennon-McCartney harmonies. Like a soothing musical balm ‘Diomyria’ is a track that gently ululates and brings the album to a sedate conclusion and ensures the silence that follows is suitably stark and haunting.

Released on the terminally cool Goldstar label Langan, Frost & Wane should definitely be on your playlist. 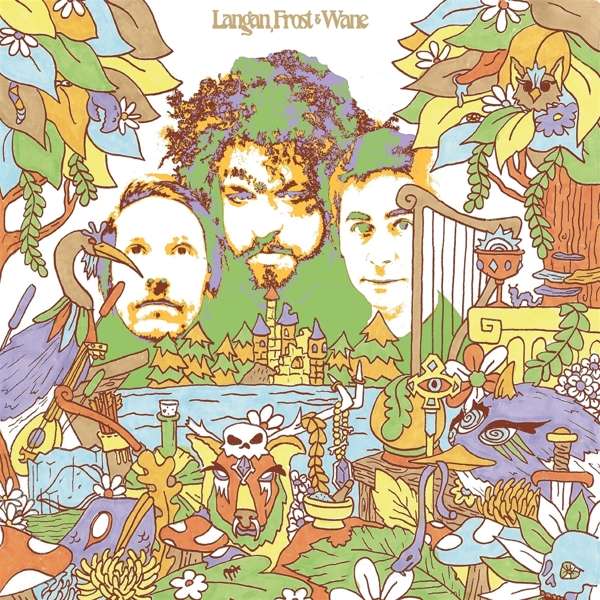