Time flies, whether you’re having fun, screaming at the walls during lockdown, or just getting on with the mundanities of life. Back in 2018, I was out on the lash, catching L.A. Guns put on a show at The Robin. A good time was had by all, but considering their history of inner-band turmoil you wouldn’t bet on the same line-up appearing on this here record.

However, stand and salute once more Tracii Guns (lead guitar), Phil Lewis (vocals), Johnny Martin (bass) and Ace Von Johnson (guitar), with Scot Coogan, renowned for assorted session work, present on drums. That there was another version of the band co-existing up until a legal injunction in April of this year is a whole other story we’ll leave for another day.

Musically, the band picks up where they left off – Hell, they’ve even recycled the odd riff, but these Sunset Strip sleaze rockers have also been sniffing their old Black Sabbath vinyl collections and brought in some heavy downer tunes that work well within the arrangements. Whether the music path now trodden affected Lewis’ lyrics or the other way round I couldn’t guess, but he sounds suitably peeved on a number of the tracks, prepared to put his money where his mouth is, and not back down. Some may say that’s nothing drastically new.

“Shot you with my cannonball, your ship’s about to sink!” he declares on the opening salvo as Guns fires off rapid fire riffs – Ignoring the two-part question and answer musical formula in favour more or a question and two-fingers up to mind your own business reply. Works for me. Here on ‘Cannonball’ we’re entreated to fast, chugging, unrelenting rock that slam dunks sliding into a hook line chorus. One’s not sure if the assorted buccaneer metaphors are about fornicating or anger management issues. And the single’s official video doesn’t help, all it tells us is that they may have put on a few pounds and some facial hair since we last saw them, that and Lewis sending up the whole Pirates of the Caribbean franchise in three and-a-bit minutes.

‘Bad Luck Charm’ is the first of the numbers to have a Sabbath feel to them, true lyrically it’s like Alice Cooper reclaimed his Prince Of Darkness role from Ozzy and joined up with the Brummie band, but that descending scuzzy punk-ass walking bass line is what grabbed me. Others in a similar spiritual Sabbath vein are ‘If It’s Over Now’, a broken chord ballad with a dark side, wherein personal integrity is the chosen path, and ‘Let You Down’, that reverberates kraut rock style before coming on Def Leppard playing doom metal. There’s much melancholy but a fragile beauty here to, vocally well phrased while being dripped in echo, with a painful scream released in conclusion.

‘Living Right Now’ cruises round the valleys down into Sunset strip at night, then a bouncing bluesy bass line bops along the sidewalk with Guns skewering some very palatable sounds along the way while delivering a short solo with a zillion squiggly notes that actually count. On ‘Better Than You’, the guitars continue to drag race with the rhythm section pummelling down as it to attack them. In both songs there’s a sneer to Lewis’ voice that Liam Gallagher can only dream of.

There are a couple of tunes that have that Rolling Stones vibe. ‘Get Along’ is laid back strummed acoustic guitars with an affecting melody, with self-satisfied lyrics no less angry, while ‘Knock Me Down’ features brisk broken chords with the rhythm section pummel and bashing away to its bleeding heart’s content. Gun’s plectrum scours the strings of his fretboard prior to full force chordal strength riffs ensuing unrelentingly on ‘Dog’, while hip jive lyrics denigrate what we presume to be the latest woman in Lewis’ life “Woof” indeed. With an itch you can’t scratch riff, ‘That Ain’t Why’ pumps out like Zeppelin trying to get a fix; propulsive, addictive, then it suddenly shifts sideways, before return to a tonal variation on the main riff.

That it all ends with ‘Physical Itch’ another Sabbath-tinged number, in fact shows the diversity of such an influence. From big crashing drums and mournful power chords, evoking Volume 4, to slow creeping riff of the kind you go on the first two albums, then an uplifting refrain, speeding up, or a quite majestic solo that’s more like Sabotage. Fear not, this remains ‘80s hard rock and metal of the kind L.A. Guns made good on first time round, just given some modern introspection without trying to look cool for its own and doesn’t outstay its welcome clocking in at just under 45 minutes.

Play loud, in darkened rooms if you must; intersperse with large swigs of booze but drugs would only spoil the mood. 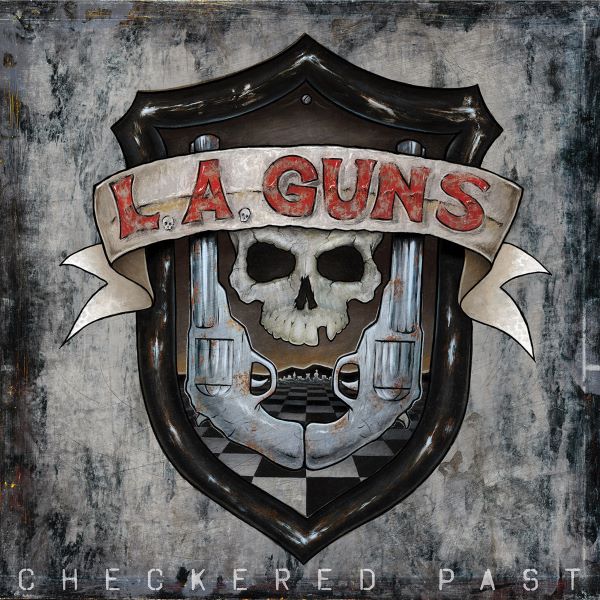