L.A. Edwards (Luke Andrew Edwards) is an American singer-songwriter and multi-instrumentalist from Julian, CA. He is delighted to announce a seven date tour of the UK – with White Buffalo – as well as the official UK release of the single ‘Trouble’ on 1 April. ‘Trouble’ is taken from the ‘Blessings From Home’ album which was produced by Ryan Hadlock (Lumineers, Vance Joy, Foo Fighters). It’s the follow up to ‘True Blue’ which was produced by Ron Blair (bassist of Tom Petty & the Heartbreakers) who has become a key mentor – in fact a member – of the band! The band will also release a brand new track ‘The Crow’ as a single on 27 May 2022.

L.A.E’s self-recorded solo debut of 2015, the ‘Secrets We’ll Never Know’ EP, marked a departure from his folk/acoustic roots to a rock band sound reminiscent of many of his childhood influences (CCR, Jackson Browne, Tom Petty, and the Beach Boys). L.A.E. began touring the West Coast with his brother Jerry on drums.

L.A.E. returned to the studio in 2017 to record what would become the ‘True Blue’ album. Produced by Ron Blair, L.A.E. cut the album live in Blair’s home studio with his brothers Jay and Jerry. ‘True Blue’ moved him towards a more fully realized, classic rock sound with electric guitars, Hammond B3 organ, and steady backbeats. Upon the record’s release in 2018, L.A.E. and his five-piece band toured heavily, building to larger stages and audiences of sold out festivals and theaters across the US. The ‘True Blue’ tour grew to include appearances with the Beach Boys, the White Buffalo, Jefferson Starship, and Amanda Shires, along with big festival sets.
“‘True Blue’ is a record I’m proud of. The songs are soulful, the playing was live and fresh! It wasn’t long before Luke was running the show, so I got out of the way. That’s really what a producer does, let other people work, and then take the credit for it! Did I mention, I love these guys…”
Ron Blair, Tom Petty and the Heartbreakers

The band came off the road in early 2020 to write and record their next album, ‘Blessings From Home’ at legendary Bear Creek Studios in Woodinville, WA. The album further builds on the band’s expansion into a lush rock sound, while returning to the folk roots of L.A.E.’s upbringing and early career. Backed up once again by brothers Jay and Jerry, L.A.E. also recruited Ron Blair and Steve Ferrone (Tom Petty & the Heartbreakers) as his rhythm section. 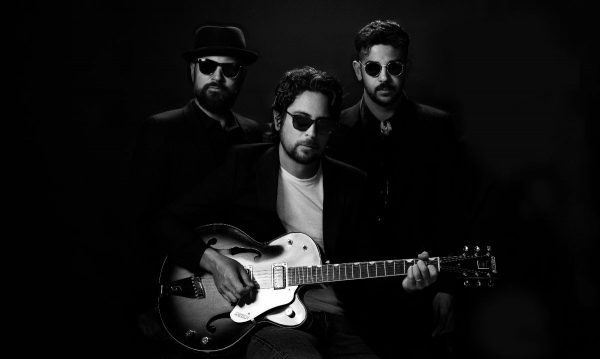 With friends like these, but a talent all of his own, it’s no surprise that the L.A. Edwards story is building towards something amazing: these highly anticipated UK tour dates mark another major step in that process.