Hang on, I hear you cry, that ain’t a blues song. No, indeed it isn’t. This is a song, and an album, of an altogether rockier hue. 2022 sees ex-cage fighter Barras coming out swinging and ready for some serious ground n’ pound. There, I promise I’ve got the cage fighter references out of the way nice and early, we can get on with the review now.

The last few years have seen Barras restless, on edge, unsure what the future will bring (much like the rest of us). So, he started writing and recording an album with no pre-conceived ideas about what it should be and how it should sound. He also tried co-writing for the first time, drafting in some serious A-lister’s who have written with, among others, Black Stone Cherry, Fozzy, Tyler Bryant, Rob Zombie and Alice Cooper.

Not a huge amount of bluesmen in that esteemed list. Barras, who like the rest of us grew up a leather-clad rock kid, found himself writing his first full-on rock album. Heavier, darker, louder, the finished product is a veritable beast of a thing.

We hit the ground running with the storming ‘Dead Horses’. A huge, almost metallic riff kicks up some dust and is rapidly booted aside by a chrome plated melodic chorus. This is very big indeed, polished,slick, modern and heavy. Barras still sounds a bit like Jon Bon Jovi but his own grit and character certainly comes through too.

‘Long Gone’ has a brief, bluesier intro before we’re back to thumping, fuzzed out riffs. There’s no let up, this is a statement of intent. Speaking of intent, we then tear into ‘My Parade’ (see above video) where Barras, surrounded by massive riffage, warns us to “fall into line or get out of my way”. Great chantalong stuff.

And the rest of the album pretty much follows suit. There are a couple of tracks that could, at a stretch, be described as ballads, ok power ballads, maybe, or possible just slightly more measured rockers, the guitars are still as towering as ever. All the moves are present and correct but it sounds completely fresh. This album doesn’t do things by halves.

And then we’re back to the rockers. It’s radio friendly stuff but still balls out rock. There’s a huge amount of distortion on display, choruses are instantly catchy, they’ll be in your head before you know it. It barrels forwards relentlessly, rarely taking it’s foot off the pedal. It chugs, it roars, it howls and, frankly, it’s a joy to listen to.

Rocking, defiant, confident and ready to rumble (sorry, another fight analogy). Barras has clearly made the album he wanted to make and the sense of release is palpable, this feels like the album he has been working towards. It’s a big contemporary rock album is what this is, and a damn good one at that, and sometimes (well, quite a lot of the time) that’s just what you need. Be sure to catch the band on tour in March, they’re a formidable live act.

Released on 4 March 2022 by Mascot Records 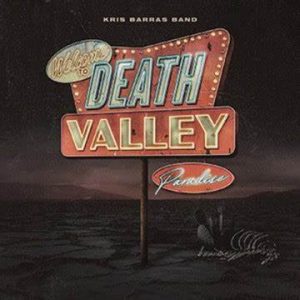